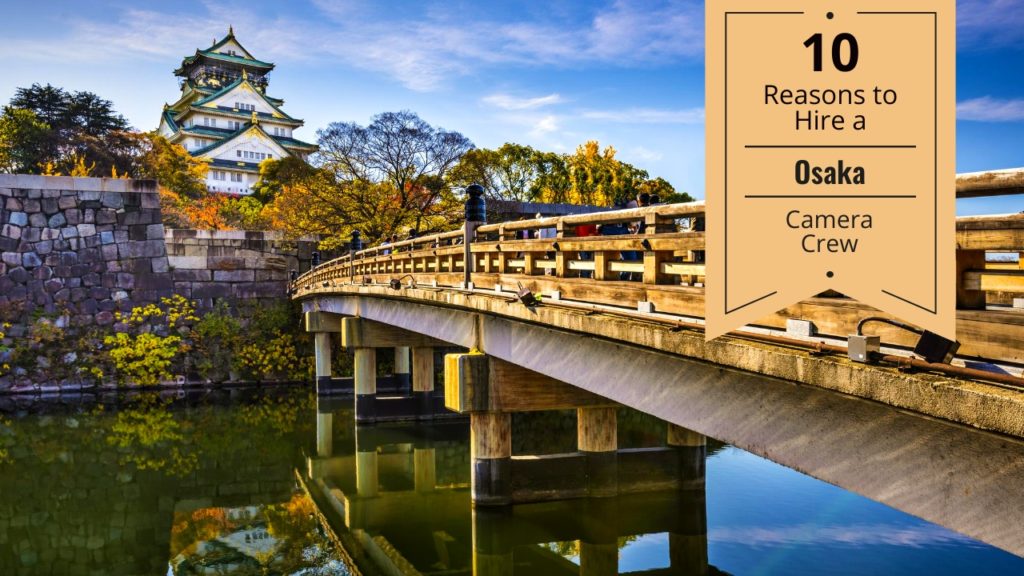 10 Reasons To Hire a Camera Crew in Osaka

Beverly Boy Productions is ready to get started on your film in Osaka, so when you need a film crew to help you create your next Japanese production, give us a call! We know that there is a lot to see and do here, and it can get overwhelming, but we can help you choose the dates for filming, get permits, and line out an itinerary. Take a moment to check out the 10 reasons to hire a camera crew in Osaka, and then hit us up when you are ready to get the ball rolling on your production.

Osaka has more than 1,400 years of history, with origins in the 5th Century. This area was a political and religious hub of activity, melding different techniques of pottery, building, and more from other Asian countries to invent new things and help the area prosper. The Meiji Reformation, which began in 1868, restructured all of Japan and Osaka flourished even more, becoming the most populous city in Japan and the sixth largest in the world, until 1925. Today, that history can be seen just about everywhere, so filming here is a fantastic idea. You can hire a videographer to help you choose the best places to see and film in this magnificent city!

When you book a camera crew in Osaka, find one who understands the weather in the area so that you can select the best dates to film. The wettest month is June, so filming outdoors during that month will be difficult. The warmest month is August, so you can get some fun outdoor shots during that time. Osaka has a humid, subtropical climate and the temperatures vary throughout the year, so you get distinct seasons, which means you can match the season you want for the film you have chosen to produce.

While touring and filming, you will definitely want to take a break and partake in some incredible Japanese food. While Osaka offers more than just Japanese food, you might as well get the best Japanese food you will ever eat while you are here, right? Check out these foods and where to get them!
A. Sushi. Sushi is probably the best known Japanese food, and just about any restaurant in Osaka can serve this amazing genre of food and make you happy you chose that location. Even the street vendors serve up Japanese food that is amazing!
B. Japanese BBQ. No, really. Beef in Japan is absolutely incredible, so BBQ beef in Japan is some of the best BBQ you can get. It may not be Texas style, but it is something right out of a dream! Head over to La Shomon for the best BBQ near Osaka.
C. Udon. If you like Ramen, you will love Udon noodles, especially in Osaka. They are thicker and more filling, and they can be made in a variety of ways. If you want to experience the best Udon in Osaka, try Chitose Nikusui.

Another reason to find a film crew in Osaka is to film beautiful historical locations such as Sumiyoshi Shrine, one of the oldest Shinto shrines in all of Japan. Built over 1,800 years ago, this shrine is said to be one of the prettiest of its kind, and you can bet that will film well and really make your video pop.

If you have something a little more modern in mind, check out the Umeda Sky Building, one of the main landmarks in Osaka. This building is an incredible 568 feet tall, making it easy to see all over the city. It has an observatory on the 39th floor, which means you can get some stunning views and footage for your video production with your Osaka camera crew.

If you need or want to do some shopping while in Osaka, head over to the Shinsaibashi District, a favorite among locals because it sells pretty much anything you could ever need or want. You will also find arcades, dining, and nightlife here, so if you want to film diverse scenes with a camera crew in Osaka, this is the place to be.

For a relaxing walk that will feed your mind, spirit, and creativity, check out the nearby bamboo forest in Kyoto. Simple, short, and sweet, but it can help you reset and clear your mind after a long day of filming in a busy city and get you refocused to make an incredible film.

In the busy and lively Central Business District of Osaka you will find the Osaka Castle- a majestic and scenic attraction that has stood and withstood war, weather, and more since the 16th Century. The interior is now a museum dedicated to the castle’s history and the grounds are quiet and picturesque, making it perfect for you to catch some footage or even conduct interviews when you hire a camera crew in Osaka.

Going to the arcade when you were a kid is nothing compared to the experience you can get at the amazing Round 1 Stadium. For an experience that will make your trip truly standout, hire an Osaka camera crew for a day and hit up the seven story arcade that has just about every game you can imagine. It’s not only fun, though- it makes for great B roll and diverse footage that will compliment any production you are creating.

Osaka is one of Japan’s filming centers, and even with that in mind, it can still be hard to get permits for filming here. Small shoots for b-roll are generally okay, but for larger shoots or in private areas, you must get separate permits for each location you plan to film, which is why working with camera crews for hire to help you map out locations and get permits is essential. Permits usually take three days to process, but can require a large amount of paperwork and documentation. Popular locations can be very difficult to get a permit for filming, because of tourism, so the farther in advance you can plan your filming, the better.