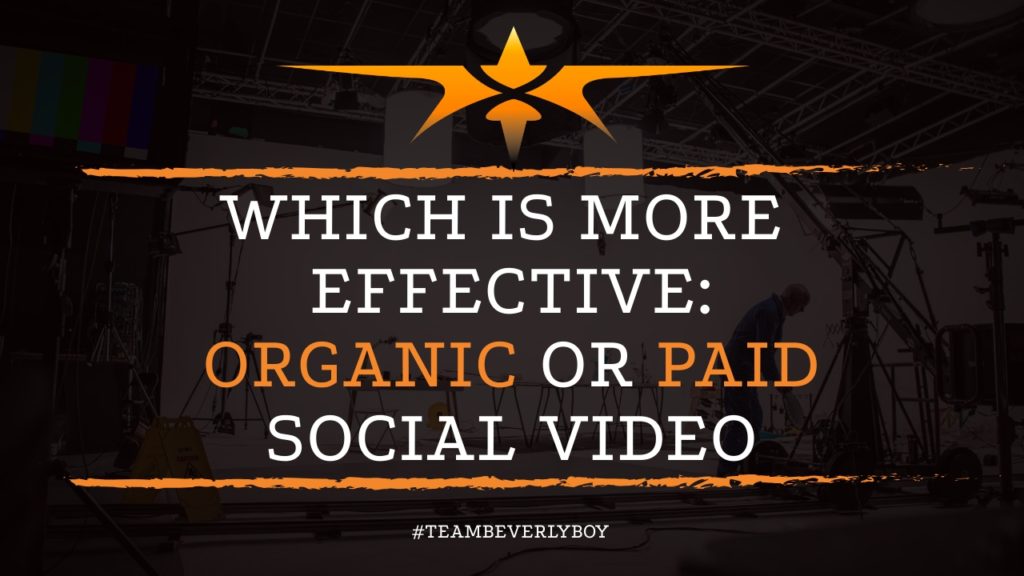 Which is More Effective, Organic or Paid Social Video?

As we compare organic vs paid social video, a lot of questions arise. 93% of businesses are reporting that they have gained new customers directly resulting from video that was posted to social media. It’s important to fully understand the benefits of this valuable resource, but which is more effective, organic or paid social video? We’re outlining the comparison below.

What is Organic and Paid Social Media?

Organic social video is a reference to video content that is shared on social media platforms without any paid efforts to advertise or boost the content. Likewise, paid social video refers to the promotion of videos through paid advertising on the social platform, also sometimes referred to as “boosting” a post on Facebook.

The goal of both organic and paid social videos is similar–they both want to convert potential leads into customers. However, the steps taken to reach those potential customers is slightly different with each type of video content.

To help you determine whether organic or paid social video is a more effective approach for your business, we’re breaking down the similarities and differences between these two types of social media video marketing.

Videos that you share on your social media platforms organically are just an addition of content to the already saturated social landscape. Much like you would share an article or a photo, a video that you share will have the potential to reach customers, followers and friends.

The audience that you reach with your organic video is generally made up of the people that already have liked and followed your brand. Posting organic social videos in this manner allows you to engage with viewers that have made the decision to follow you and allows the potential opportunity for those viewers to share with people they know.

There are many benefits to organic social video including:

However, there are some negative aspects when comparing organic social video vs paid social video. Potential cons include:

On the flip side, paid social video provides a unique opportunity to reach viewers that you may otherwise not be able to get your message to. Much like a paid promotion or commercial, paid social video requires brands to pay a fee upfront or as they go for the engagement that the video generates. The brand chooses the targeting, who they want to show the video to, and can create lookalike audiences based on demographics they have for their own audience or based on audiences that are already paying attention to similar brands.

Paid social video connects with a wider audience and can actively generate more leads for your business. But, all of this comes at a price. Depending on the content, the target market, and various other factors paid social video can range in price from a few dollars a day to several thousand dollars a day.

These promoted videos can irritate some viewers just as a commercial on television could be irritating. Some view social media as a safe, unbranded zone–and branded, promotional videos are frowned upon. But, there are benefits. Paid social video has the following pros:

However, just as there are negative aspects to organic videos on social media, paid videos have several negative sides as well. These include:

Which is Most Effective?

So which is more effective, organic or paid social video? Ideally you incorporate a mix of both organic and paid social videos into your marketing mix. This will allow your business to get the most out of every piece of content that it creates. Don’t limit yourself to one or the other–use both paid and organic social videos to boost traffic, gain exposure, and increase visibility for your brand.