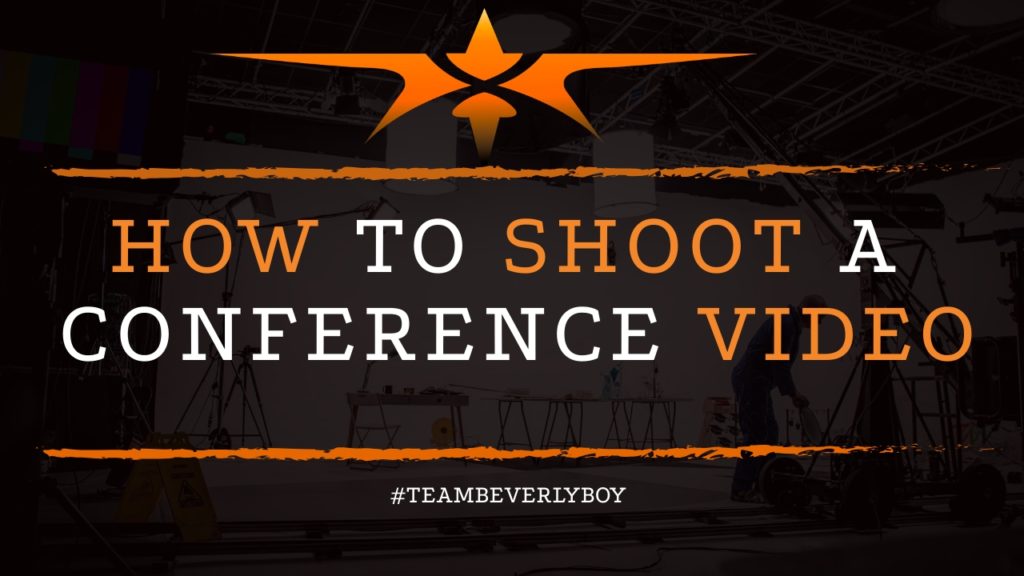 How to Shoot a Conference Video

Several Cameras Not Just One!

First and foremost, you should plan to have several cameras available at the event so that you can capture all the important elements of the keynote speakers as well as the audience or attendees and those otherwise involved. You’ll want to have multiple cameras so that you can capture multiple styles and angles of shots too. Even if it’s a relatively small conference, having at least two cameras will allow you the flexibility to use some creativity with your captured footage. 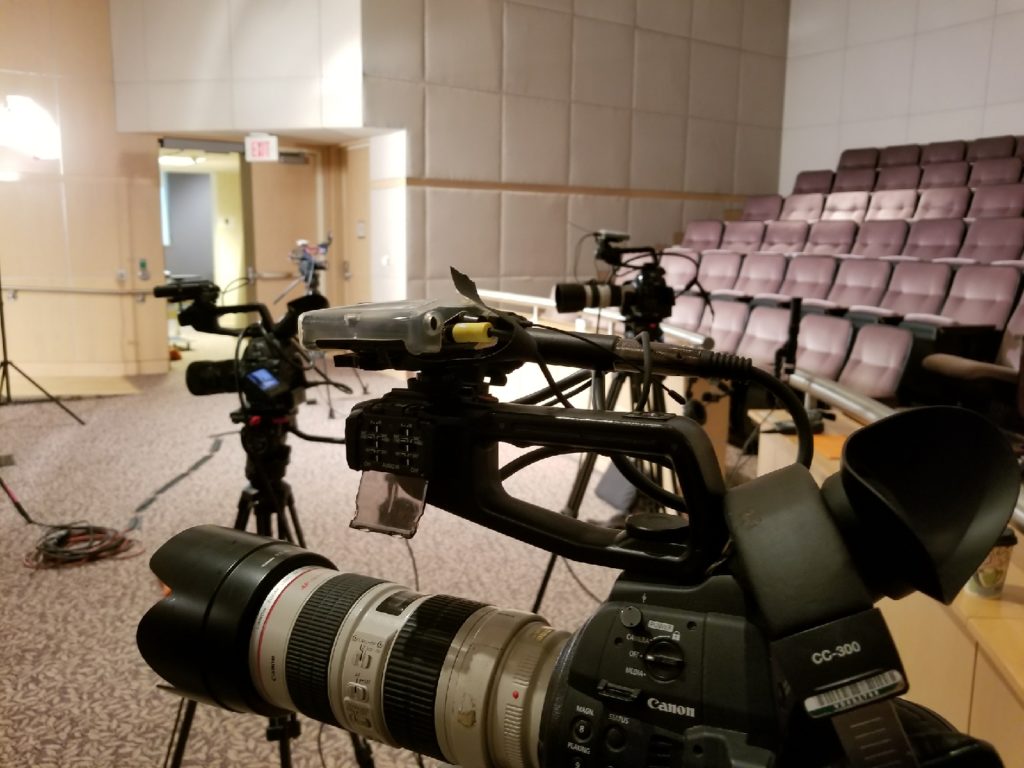 Inevitably, someone is going to say something game-changing, and you won’t catch it if your cameras aren’t rolling–constantly! So, when you shoot a conference video, make sure you’re prepared (with enough equipment such as memory cards/hard drives, batteries, etc.) to keep rolling throughout the entire conference non-stop. You certainly don’t want to miss something vital just because you had to change a battery or memory card.

Coordinate with Others at the Venue

Before the conference shoot takes place, you should coordinate with other contacts at the venue so that you can determine what the requirements will be in regards to sound recording, lighting, and other needs during the event. Discussing in advance allows you to get a feel for what support will be available to you the day (or days) of the conference, and you’ll be able to better plan for the shoot accordingly.

On the day of the event, set your equipment up and then communicate with the rest of the team, such as sound and AV, as well as the event coordinator so that you begin testing and making sure that everything is in line for the best possible video footage and audio recording.

If there is no AV team at the conference, you’re going to want to discuss whether or not there are microphones in place to be used and whether you can obtain a feed from the microphones or if you will need to prepare to capture your own audio footage. If the microphones being used at the conference are just hand mics, find out if there is any way you can get speakers to capture audio using lav mics.  (You’ll have to work with the audio team on this in advance).

Set Lighting for the Conference

The conference lighting is something that really should already be determined by the conference coordinators or, if you’re working with a full-service production crew, then you will get lucky, and the lighting setup will be established to your needs based on a variety of factors. Take steps to check the lighting beforehand so that you know what you’re working with. Determine what equipment to bring with you and what additional lighting may be needed in order to capture the best footage of the conference event. Remember, you’re most focused on getting enough light to capture your footage without the need for a fully cinematic, film-style light setup (which likely would NOT happen!). 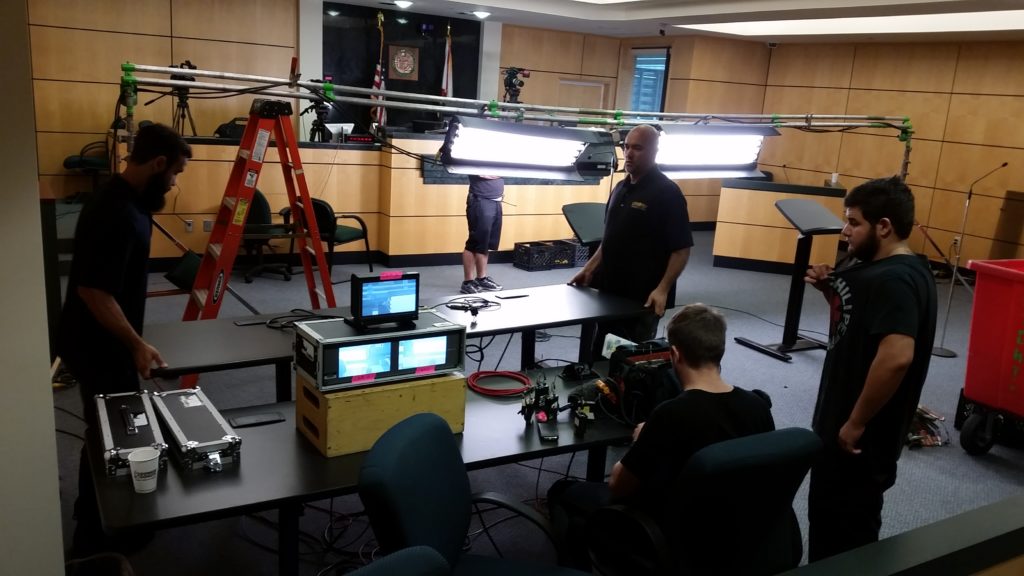 As you consider which cameras to bring with you to the shoot battery life should be a top consideration. You want a camera that has a long battery life is prepared to record for an extended period of time and is reliable. The exact style of camera that you choose will depend on your own personal preference, the available equipment that you have in your film arsenal, and factors relative to the actual film shoot specifically.

Consider more than just battery life when choosing a camera. Also, think about the memory or the expandable memory that you have available for the camera. If you are filming the conference in 4K, make sure you have significantly more expandable memory on deck as your cards are likely to fill quickly with higher resolution.

Finally, you need to choose the positioning of your cameras so that you can get all of the shots that you need. As you learn how to shoot a conference video, keep in mind that you should have at least two cameras and positions in place to capture footage throughout the conference event. If budget allows, four cameras or more are welcomed!

Depending on how many cameras you are working with, consider positioning your camera on either side of the auditorium so that the audience is seated on either side of you. This way, you are not interfering and you can still capture coverage of both the activities occurring on stage as well as those taking place in the audience.

For multiple camera setups, position a camera on either side of the stage such that you can capture the activities taking place on stage from an angle including public speakers on the stage and the audio  coming from the speakers (This is especially advisable IF you will not be provided a direct AV feed).  Also, consider placing a camera close to the front of the stage if there are resources to do so in order to capture close-up shots of presenters during the conference. Extreme close-ups captured from a lower angle like that can add a powerful touch to the final edited footage.

Now that you have done all of the necessary set-up steps and checked your equipment to ensure everything is ready for the shoot, you can begin filming. Make sure that you have double-checked your batteries and appropriate storage media, camera setup, and sound. Prepare for the various obstacles that will likely come into play as you begin shooting. Unlike a normal shoot, a conference video will entail things like background noise, presenters that are certainly NOT actors, and equipment that may or may not add to the chaos.

Have fun with it, tell a story, and capture the conference with the professional skills that you entered with!

Here is a  conference video produced by Team Beverly Boy