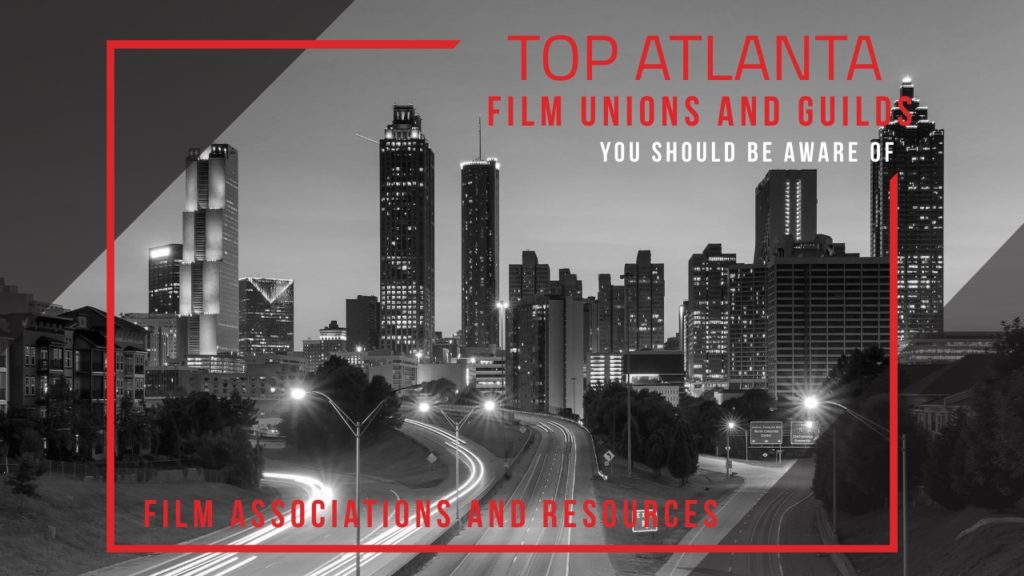 Best Atlanta Film Unions and Guilds To Connect With

Atlanta, Georgia enjoys a robust film industry, complete with several local Atlanta film unions and guilds appropriately placed throughout the area offering support and various forms of assistance in all aspects of the Atlanta video production industry. You’ve definitely come to the right place if you’re in search of entertainment trade associations in Atlanta. We have an excellent resource list for you below. Continue reading to learn more about artist representation and the importance of taking steps to protect your artistic and legal rights in the industry.

The list below highlights several local organizations that offer memberships which help Atlanta filmmakers along their journey to successful and meaningful contribution to the local film industry. Each of the Atlanta film and TV associations listed below are available for your reference and may be helpful for your next project. They are in no particular order, so feel free to look them over and decide which is best for you.

The International Alliance of Theatrical Stage Employees is a nationwide group with local chapters throughout the country, including the Local 479 one of various Atlanta film unions and guilds.  This group works together to provide support to one another in the motion picture, television, and commercial video production industry offering various membership benefits including a disability program, health insurance coverage, retirement funding and various other important benefits that are often otherwise out of reach for freelancers in the film industry.

Becoming a member of the IATSE Local 479 requires Georgia or Alabama residency, although transfer from a different IA location is also an option. Check the website for additional member benefits and requirements to get started.

Teamsters Local 728 is one of many Atlanta unions and guilds that works together with members to form a cohesive group of filmmakers and industry representatives that support one another in working towards successful film careers. This group was formed over 48 years ago and has since helped many filmmakers overcome challenges specifically related to labor and working a job in the fine arts. The Atlanta office is conveniently located on Lakewood Avenue, where the Weldon B. Mathis Labor Complex has been it’s the home office for nearly 50 years. Visit the office, website, or give a call to find out more about the Teamsters Local 728.

The Local 600 International Cinematographers Guild (ICG) is representative of many of the most talented arts professionals from around the world. This group is diverse with skills and major accomplishments ranging from early careers in cinematography to advanced publicists responsible for multi-million dollar productions.

The International Cinematographers Guild features contract assistance, production support, medical coverage, employer-funded retirement programs, and several other benefits and resources designed to support filmmakers along their path to meaningful production careers. Check out the ICG website for additional details on training and networking events near you

The Georgia Production Partnership (GPP), like various other Atlanta film unions and guilds, represents the film and television industry by providing strength and support to members throughout Georgia. Attaining membership with entertainment trade associations in Atlanta, such as the GPP, provides ample opportunities to network with others in the industry and receive discounts on equipment, supplies, and various other needs. The mission of the GPP is to engage the community and work together to protect tax incentives for Georgia, activate various activities that advance all aspects of the industry, and offer education to residents to strengthen the industry.

Film Georgia provides a vast directory of film and cinematography industry professionals, including Georgia vendors, service providers, and casting locations, to support this field. Businesses and freelancers alike can find details on casting and crew information, prime locations for filming throughout Atlanta, and production resources on the Film Georgia website or by contacting Film Georgia for additional information. Film Georgia connects you with local events and the necessary tools for advancing your career.

The Atlanta Film Society brings art, culture, and community to the heart of the city with a central goal of supporting the thriving film industry and its leaders, members, and followers. Since the founding of IMAGE Film and Video Center in 1976 the Atlanta Film Society has represented media artists and film producers in conjunction with various other Atlanta film & TV organizations.  Today the organization is 42 years strong with a rich creative industry offering diverse culture advocacy for film and media arts and support to the community both near and far. Check the website for screenings and events, education, and special programs.

Oz Magazine is a Georgia film industry resource guide that releases issues every other month to support entertainment professionals on their paths toward success in the industry. This is one of several Atlanta film associations and resources available to assist residents as well as those considering a career in fine arts in Georgia.

Issues touch on various film and television topics, including awards, strategy, events, and public relations. 8 Years in a row, Oz Magazine has received Gold GAMMA Awards from the Magazine Association of the Southeast for being one of the best film and television media resources available. The representative of many Atlanta film unions and guilds, OZ Magazine, features casting calls, events and entertainment news, and local resources to help filmmakers advance in the industry.