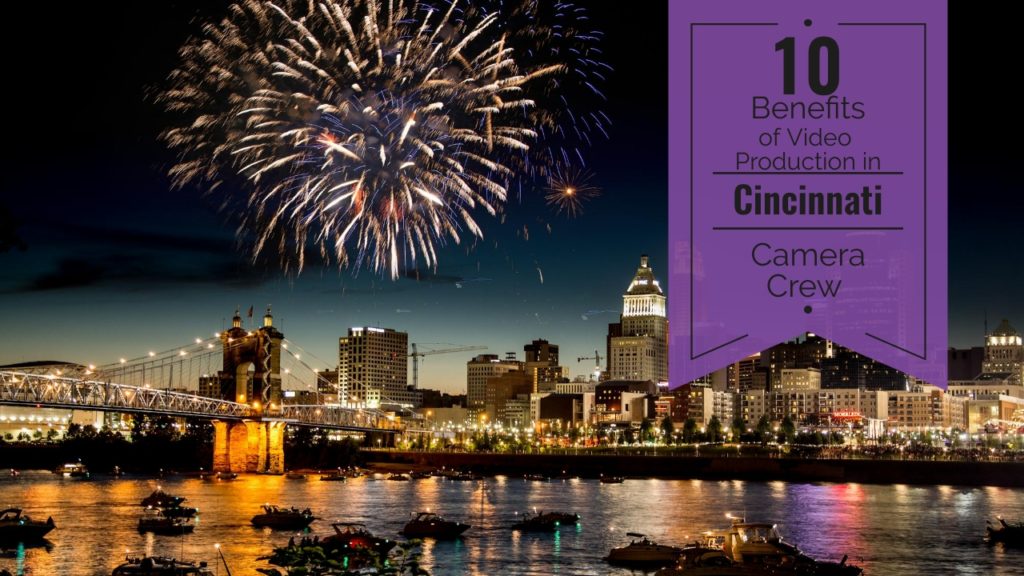 10 Benefits of Video Production in Cincinnati

Cincinnati, Ohio is full of great places to film and could be your next spot for your major project.  Hire a local crew or videographer to capture on film this amazing city.  Here are 10 benefits and facts to know when seeking video production in Cincinnati, Ohio.

The state of Ohio doesn’t require permits for video production in Cincinnati, but you may still need one if filming on Cincinnati owned property.  To inquire if your project may need a permit, contact the Cincinnati Film Commission for more information.

The summers in Cincinnati are warm and humid.  While the summers can be pleasant, the average temperature is 54 degrees for the year since the winters can be quite cold.  You can expect snow and rainfall here.

Book a camera crew in Cincinnati to film around Over-the-Rhine, one of the oldest and most historic neighborhoods in town.  Locals say it is a must visit to gain a cultural view of the city and shop around.  Some of the most popular restaurants are also located here making it a perfect stop if filming a documentary on the food scene in Cincinnati.  This spot is also great for b-roll footage as well from the charming streets and alleys.

Once the location of Fort Washington, the city of Cincinnati has grown since the days of its founding.  As a fort, it provided military protection for the surrounding territories.  Later on though, the city became the first and only city to build and own a major railroad in 1880.  The railroad then lead to the economic and population growth leading to the city the nation knows today which gave us several people of importance such as Neil Armstrong. The city’s history is often a popular subject when our clients are seeking video production ion Cincinnati.

The temperatures are moderate in Cincinnati with lows in the thirties and highs around 76.  The annual rainfall is 40 inches per year with most coming down during the rain summer months.  Expect snow as well in the winter as the winters can be quite cold.  Your crew should pack for layers year round as the temperature is more towards the cooler side for most of the year.

Hire a videographer to film your next big event in Smale Riverfront Park.  Boasting exquisite gardens, the Labyrinth, Anderson Pavilion and interactive fountains, you can find something for every shot here.  The pavilion is great for weddings and the rest of the park can offer peaceful settings or great natural b-roll.

Take a break from video production in Cincinnati to try some of the city’s staples.  The cuisine here is a mix of Midwest classic American and German.  Locals here are known to eat about 2 million pounds of Cincinnati style chili a year.  They swear by it and beats any other chili around.  Make sure to also try the barbecue from Montgomery Inn.  Before you leave with your crew, also try the Goetta, also known as Cincinnati Caviar, which you can purchase at local supermarkets.  It is a mix of ground meat with steel cut oats, bay leaves, salt, pepper, and thyme from the German Immigrants that came to the city in the 19th century.

Cincinnati, Ohio offers several transportation services to visitors and locals alike.  There are taxis, buses, shuttle services, streetcars and more offered.  The best option would have to be the Enterprise car rental service though for your crew to haul equipment to and from shooting locations around the city.

The Roebling Suspension Bridge is the most distinctive landmark found in Cincinnati.  It was constructed in 1866 and is still functioning today after having maintenance done in 2006.  Capture some great b-roll footage or gain amazing skyline shots from the bridge.  Sitting above the Ohio River, this bridge shows off its beautiful architecture reflecting off the water’s surface.  Any local will say that this landmark is a must to film when seeking video production in Cincinnati.

In need of some beautiful night shots or want a shot of the heart of downtown, then go to Fountain Square.  You can hire a crew for these needs or for filming the multiple events that are held year round here like Oktoberfest.  There is also a popular outdoor ice rink located here as well.  In the center sits a wonderful fountain that can also make a great interview location or needed scene for your next project.