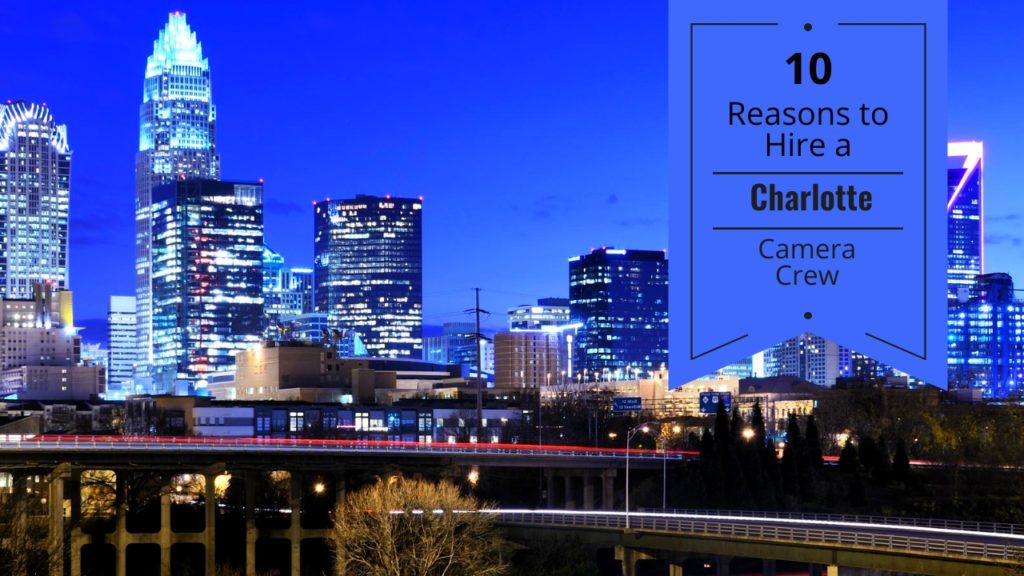 10 Top reasons to hire a Camera Crew in Charlotte

Here at Beverly Boy Productions, our clients call on us when they need to hire a camera crew in Charlotte, North Carolina. The largest city in the state and  the third fastest growing major city in the nation.  With comfortable weather for most of the year and many spots to film, this capital offers it all. Today we are sharing 10 things that you need to know when planning on hiring a film or camera crew in Charlotte, North Carolina.

For transporting your film crew around town, make use of the light rails, street cars, and ride shares like Uber and Lyft.  The city is also a major hub for biking around the town and also offers buses and cabs for travel.  For crews with large or a lot of equipment, using the cab or rideshare options would be the best to utilize.

The climate of North Carolina is described as being humid and subtropical being located on the Atlantic coastline.  The winters are mild and short, while the summers are hot and extremely humid.  There is very little snowfall to worry about during the winter months, but expect rain during the rainy season. But no worries our Charlotte film crew will know the ins and outs on set to avoid any weather delays.

To film in Charlotte, you need a permit that will cost you a minimal fee.  Permit usage is required for any filming taking place on state-owned property, buildings, parks, historical sites, lakes and other recreational properties.  There may be additional fees if your crew needs to request help from local law enforcement or park staff.  To help with the permit process, please contact the North Carolina Film Office.  Click here for the link to their website.

For the best filming weather, spring and fall offer a refreshing air to the city.  The rainy season is between the months of May and August, especially close to July.  The temperature ranges from the high 80’s to the low 30’s.  If filming in winter, the sky is usually overcast and there may be some snow between December and March, but not enough to hinder any shoots.

If filming for a historical setting or documentary, Charlotte is a great setting to hire a crew.  Settled in 1755 by the English, Charlotte was named after Queen Charlotte of Mecklenburg-Strelitz.  The city also was a stage for the coming of the American Revolution for what brought the Declaration of Independence to life.  In 1775, the leaders of the settlement decided to sign and deliver the Mecklenburg Declaration of Independence to Philadelphia.  This inspired our founding fathers to create the Declaration of Independence we know today.  This is memorialized by a statue of Captain James Jack and several other historical spots located throughout the town that would add rich historical flair to any videos.  The capital has also served for the nation’s wealth in the past with a mint and was once the nation’s top gold producer until 1848.

One of the places that has been used in films and television before is Freedom Park.  Seven acres of wooded park gives to amazing overhead shots of nature and also places to film for romantic or peaceful scenes.  There are plenty of beautiful bridges and amphitheaters to use in foregrounds and backgrounds alike.

While in Charlotte and you and your crew are in between shoots, take a break to explore the local cuisine.  Part of the South, Charlotte offers fried chicken from Price’s Chicken Coop and amazing pork shoulder barbecue at Midwood Smokehouse.  The cuisine can be described a balanced mix of classic American, comfort foods and international tastes.  There are many street food vendors located throughout the city to stop by and have a snack you will remember.

For amazing architecture, you need a videographer to capture the beauty of the Hearst Tower in Charlotte.  You can also use the top of the tower to acquire panorama shots of the city skyline or explore the different floors for a look into the historical points that made the city into what it is today.

A great bronze statue stands in Midtown that shows the essential Captain James Jack.  He was the one who had delivered the Mecklenburg Declaration to Philadelphia.  This site gives for a great place to hold interviews or to gain scenic shots of the city for a b-roll.

Gain a setting straight from the 1920’s Gilded Age with the Duke Mansion.  Located near the most historic part of the town it offers 4 ½ acres of well-kept gardens and grounds.  This location offers another great place to hold interviews, give a historic look into Charlotte or a great starting point to explore the historical district of Charlotte.  It is also a great location for filming weddings.