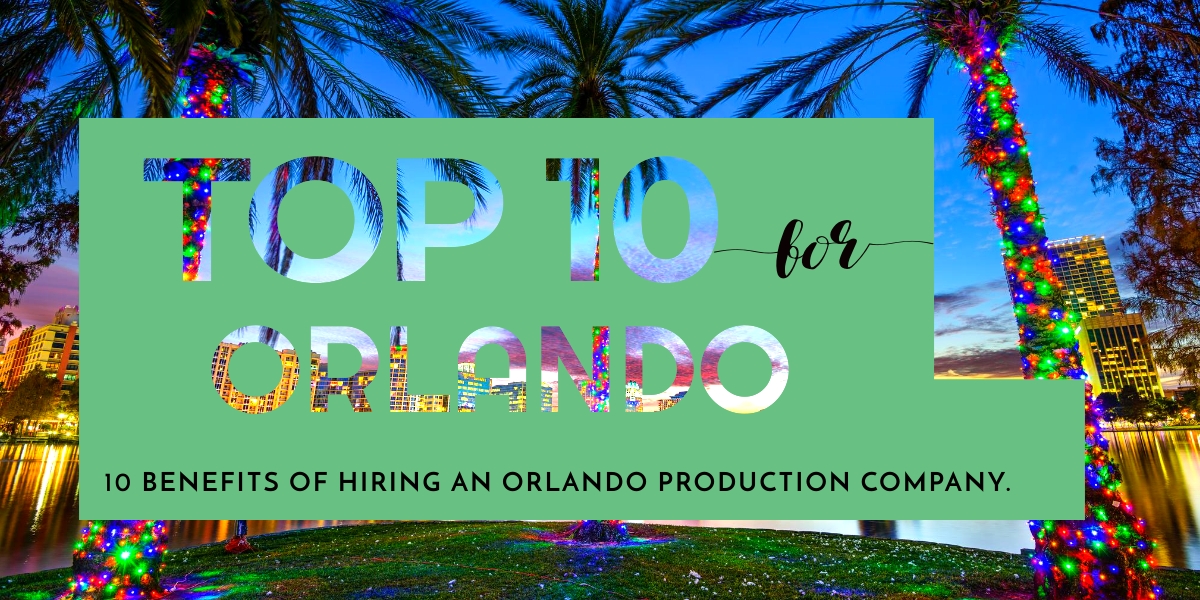 What could be better for inviting people to something in Orlando than to portray one of the most iconic destinations as your backdrop? The Walt Disney World Resort isn’t only an extremely fun theme park, it’s also an impressive and highly recognizable background for any video production that you may have in mind. From the rides to the shows and the grounds themselves, there’s nothing quite like a visit to Walt Disney World Resort.

Are you a huge movie buff? Have you ever dreamed of riding these films? Well you can do that at Universal Orlando Resort! From lands dedicated to Harry Potter to roller coasters that will delight any thrill seeker, this resort has all the amenities you need for a perfect theme park day.

Florida is known for being a state where you can stay warm as long as possible. Summers are very long, wet, and quite hot while winters don’t get very cold and can be a bit cloudy. You won’t expect temperatures to drop below 52-degrees, although there are always freak days. The temperature in the summer does go above 91-degrees every now and then, but not often. If you want to avoid filming when it’s rainy, consider working a local Orlando, Florida production company during the dry season.

If you’re looking for a unique place to capture film with a local video company that has nothing to do with the mouse, the Orlando Science Center may be the ideal location for you. From special events like Science Night Live to event spaces for birthday parties, and workshops for tots, the Orlando Science Center is a fun destination for everyone—that is also highly educational.

Are you a bit bored of the theme parks? Don’t be surprised, it happens. If you need a break like a family picnic next to the waterfront or you are looking for a great location for your video production with a top Orlando, Florida production company, then look no further than Lake Eola Park. Whether you want to go running, ride on the paddle boats, or watch a concert in the Amphitheater, this is a favorite park for many reasons.

It can be a challenge to pick where to eat in a city that is known for having a vast array of cuisine options to choose from. From Italian to contemporary American fare to Asian delicacies, there is something for everyone in this city. Here are a few of our favorites:

You may want to consider filming your project with production companies in Orlando at the Harry P. Leu Botanical Gardens. Whether you prefer nature and flowers over theme parks or are looking for a tranquil setting for your video production, the Harry P. Leu Botanical Gardens are an oasis in the midst of a very busy city. 50-acres of gardens that are home to all kinds of plants and flowers, it’s a beautiful location for whatever you may need it for.

Fort Gatlin was built south of Orlando to protect the original settlement from attacks. This was during the Seminole Wars back in 1838. Once 1840 rolled around, there was already a community budding around the Fort. By 1856, the city was known as Orlando and while it’s not clear where the name came from, some think it was named from one of Shakespeare’s play’s characters. Once an important of the citrus industry, Orlando is now more known for it’s tourism than anything else.

As one would imagine, you can’t just go into any theme park and set up a whole production set just like that. Unless you’re filming at a local Orlando production studio or are doing a new segment, you’ll want to make sure that you get the right permits for the type of production you’ll be doing. It can take up to 5 days to process permits, so keep this in mind.

In a city full of big colors and lights, a lot of attractions, and hustle and bustle all around, the Basilica of the National Shrine of Mary is actually a wonderfully tranquil location for simply relaxing at, whether you’re of the Catholic faith or not. The beautiful architecture of the exterior makes it an iconic backdrop that many top production companies in Orlando like to use.