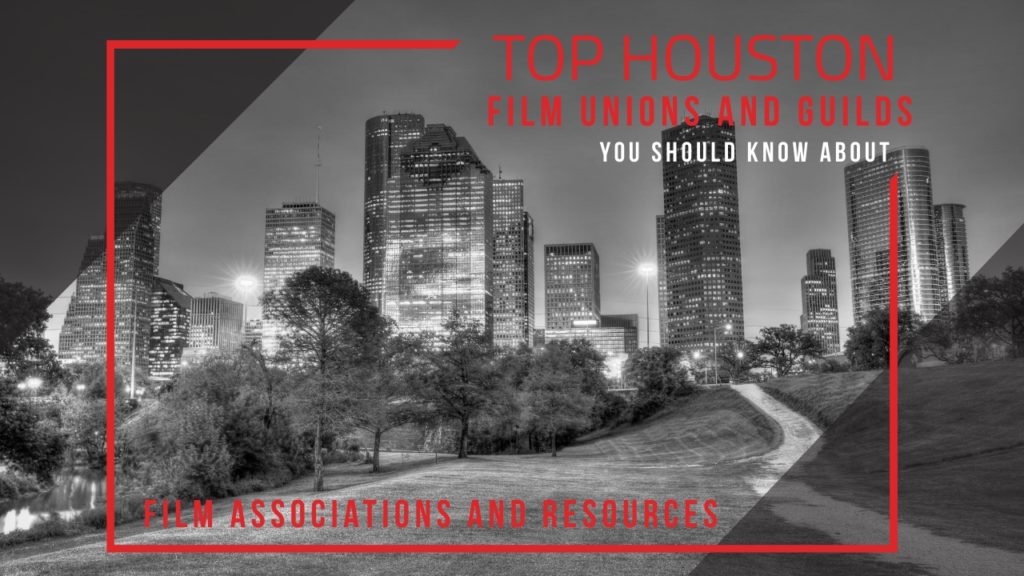 Top Houston Film Unions and Guilds You Should Know About

Houston, Texas, is home to a robust film industry where there are several Houston film unions and guilds in place to support every aspect of the Houston video production industry. Filmmakers seeking entertainment trade associations in Houston will appreciate the following list that we’ve compiled. Continue reading for details on artist representation and how to protect your artistic and legal rights. Each of the organizations listed below offer Houston filmmakers protection as well as industry support on their journey toward becoming meaningful contributors to the local film industry. The Houston film and T.V. associations listed below are available for your review, in no particular order. Consider one, or several, for your next project.

The I.A.T.S.E. Local 51 Chapter for Houston and Galveston, Texas, provides support to craftsmen in the film industry, much like various other Houston film unions and guilds. This organization has offered trade support for over 120 years. It continues to provide members with a wide range of services, including networking opportunities, events hosting, insurance coverage, and wage management for fair worker pay throughout the film industry. For more information on the International Alliance of Theatrical Stage Employees of Houston & Galveston, Texas, visit the Local 51 website.

SAG-AFTRA of Houston-Austin provides several member benefits that are similar to those of other Houston unions and guilds. Member benefits include special deals and discounts, healthy pensions, contracts, and collective bargaining, workshops and educational opportunities, special resources for non-union workers, and various tools to support the industry. For details, visit the SAG-AFTRA of the Houston-Austin website.

Women in Film & Television-Houston (WIFT-Houston) is a non-profit organization that is dedicated to supporting women seeking to reach the highest advancements in television media. WIFT-Houston offers several networking opportunities similar to several other entertainment trade associations in Houston, but the focus here is mostly on women. Today, male membership does account for 20% overall with heavy contributions from college students and educational institution sponsors.

Houston Media Source offers a public access station that includes special resources like cameras, light kits, microphones, and other studio related equipment. As a public access station, Houston Media Source offers residents and those seeking a career in the arts an opportunity to live out their dreams in a real studio. Share ideas, host a show and network with others in the area.

Backstage Magazine provides highlights on the film industry in Texas, offering up the latest events, services, and support to readers. One of several Houston fIlm associations and resources available to help filmmakers enrich their careers through education and support, Backstage Magazine provides casting calls, talent acquisition, and community partnerships for creators of all stages of production.