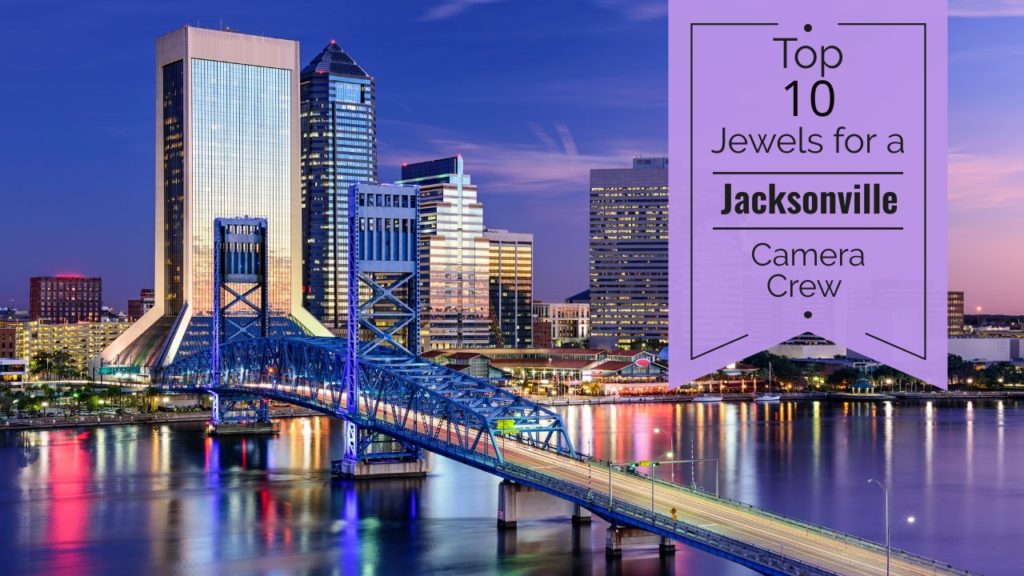 When our clients need a camera crew in Jacksonville we get excited, it’s a great place to shoot video. Jacksonville, FL in the Sunshine State of the United States offers sunny days and amazing sites.  Home to different breweries, art scenes, and beaches, Jacksonville is a great place for your next filming destination.  Here are some facts and must haves for your future video shoot.

Jacksonville has one of the most comfortable climates found in the United States according to the Sperling Index.  Located in the Sunshine State, there is 221 days of sunshine a year.  There is no snowfall as the winters are mild and sunny.  Plan for a little bit of rain and high humidity during the rainy summer season.  When you hire a cameraman here, they will be well versed in the ups and downs of the local weather.

With uch a rich history any film crew will find it enjoyable to capture great footage of J-Villes’ many offerings. Jacksonville has several great historical sites from the French colonization era to the civil war era.  Unfortunately, during the civil war, most of the historic sites were destroyed by the Union and Confederacy as the two opposing parties fought over the territory.  After the war, the city was rebuilt with the only remaining saw mill and some historic sites still stand or have been rendered in honor of its history such as Fort Caroline memorializing the French colonization efforts in the 16th century and some plantations on Ft. George Island that would be great for film settings.  There is also the historic downtown located by the river that provides a scenic and cultured view of the city.  Jacksonville also used to be the home of 30 plus movie companies in 1916 with stars such as Fatty Arbuckle and Oliver Hardy.

Jacksonville is known to be extremely pedestrian friendly, but that may not be the best way to get around the town with a camera crew carrying equipment.  The best way for a film crew to travel around may be by rental car and there are many convenient locations including an Enterprise located in the International Airport.  Jacksonville also offers many other great options that provide a more scenic view of the city such as the skyway, trolleys, river taxis or the historic, and last of its kind, St. Johns River Ferry.

For more of a historic atmosphere with lots of culture and art, the Riverside Historic District is the place to be.  Located off the St. Johns River it offers many different shops, art museums and food.  With laid brick walkways along the river and beautiful parks, the historic district gives a great place for crews to catch amazing shots or to absorb the amazing culture of Jacksonville.  You can also catch a beautiful sunset and scenery on the river taxis or ferry that sail the St. Johns River.  A must see event is the Jacksonville Light Parade off the river during Thanksgiving weekend.

To capture the old South of Jacksonville, Kingsley Plantation is a must have shoot.  They offer tours on the weekends and it is open to the public during certain hours of the week.  There is also an audio tour called “The Lion’s Storyteller” which gives an immersive explanation of the historic landmark that was owned by Zephaniah Kingsley and his wife Anna, whom he had freed from slavery.  Hire a camera crew for a day to capture this historic site that includes the plantation house, kitchen house, barn, slave quarters and more of this surviving plantation from before the Civil War.

Jacksonville is a melting pot of different cuisines from throughout the world with over 100 ethnic restaurants and several markets. A great city for a camera crew to break away from an arduous film set, and settle in for some delicious local dining It is mainly known for its southern classics such as Barbeque with mustard notes and Soul Food from its Deep South roots.  Black Sheep Restaurant is a great place for farm-to-table southern cuisine.  If looking for a more unique Florida staple, there is also the swamp fare that is found thru Florida such as gator, frog legs and soft shell crabs.  Located off the coast also leads to great seafood choices for many restaurants such as Clark’s Fish Camp and St. Mary’s Seafood and more.  Jacksonville is also the home to several breweries as well that are worth visiting.

Jacksonville offers amazing breweries found throughout downtown.  They even offer the Jax Ale Trail which is a fun way to explore Jacksonville while tasting the local brews along the way and providing film on the night life of the city.  This trail also offers tours of these breweries which may provide excellent footage on the many breweries found in town such as Aardwolf Brewing Company, Engine 15, Bold City Brewery and Budweiser.

When filming in Jacksonville, a permit is needed when using public property.  This permit is free to obtain, but needs to be filed seven days before filming can occur.  If road closures are needed, a separate permit is needed.  Click here for more information on filming permits and workers comp.

With only 52 inches of rain a year, Jacksonville is a great place to film without the worry of too much rain.  It is mainly sunny and the weather is usually in the 70’s to 80’s during the spring and summer with lows around 60 at night.  These two seasons are usually balmy while the fall and winter are less humid.  During the fall and winter, it seldom drops below 40.

The Friendship Fountain is a must have shot while filming in Jacksonville.  A popular gathering spot for a peaceful run through the town or picnics, it offers many different programs at different times of the day and is a romantic spot for night shootings.