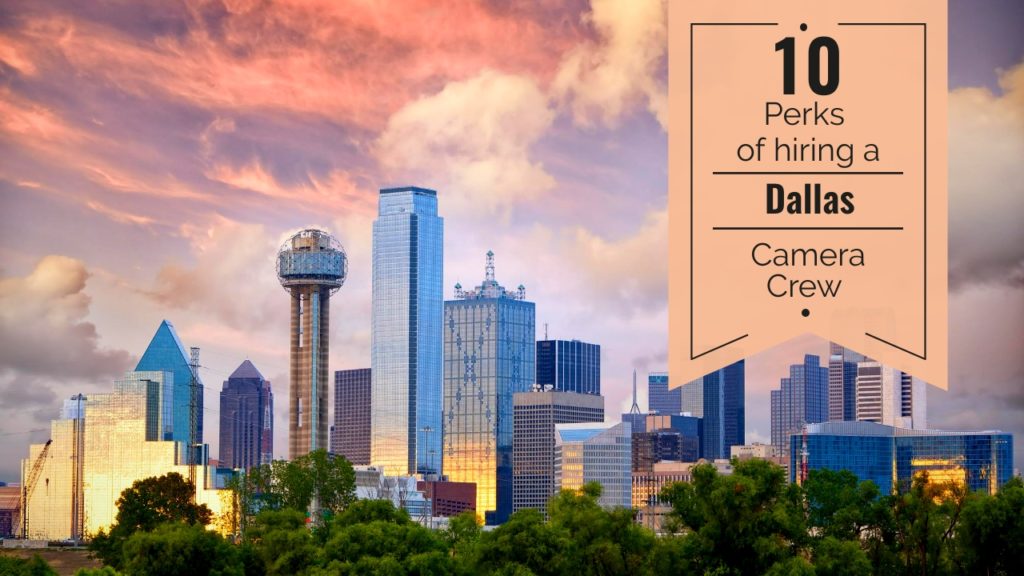 10 Perks of Hiring a Camera Crew in Dallas, TX

If you’re looking for great people, beautiful scenery, and plenty to do, Dallas is the perfect destination for your next big project. From amazing food to new experiences, throughout Dallas, you’ll find plenty of ways to fill a one, two, or even three-day shoot. Whenever they need to hire a camera crew in Dallas, our clients know they can count on Beverly Boy Productions to get them the best cameramen available. Here are things to look forward to when you want to find a film crew in Dallas.

The Texas State Fair is an annual state fair held in Dallas at historic Fair Park and has been one of the biggest draws to the city since it began in 1886. The festivities usually begin the last Friday of September and end 24 days later. From 100 live performances to delicious food to hanging out with Big Tex, no matter which corner of Texas (or the rest of the world) you’ve come from, the State Fair of Texas has something for you. Even if this iconic gathering is not the subject of your film, the thousands of people who flock to it every day make it a perfect place to record some sound samples and ambient noises with your camera crew In Dallas.

Dallas is beautiful, it’s entertaining, it’s also a challenge to navigate. Traffic is a constant in this city and if you have a set schedule to keep during filming, you may not want your cameraman stuck in bumper to bumper traffic. When planning some video production in Dallas, it’s important to know your options and understand what would work best for you and your crew. Take advantage of the free transportation options throughout the city, from the M-Line Trolley to the D-Link, DART’s free shuttle service, to private cars and ridesharing. Dallas makes it easier than ever to navigate through the city and get your crew where it needs to be.

As one of the most bustling and beautiful cities in the south, you can expect plenty of that sunshine and high heat that Texas is so famous for. The winters are short and fairly temperate with some chance of snow, hail, and even ice storms. In the summer, however, the temperature may not always be for the faint of heart with temperatures often climbing into the 100s, however, you can rest easy having plenty of cool buildings and ice cold drinks to cool you down. The best time to shoot with a camera crew in Dallas would be the spring or fall when the temperature is not too extreme.

While it’s no surprise that Dallas is hot in the summer, this beautiful Texan city also has a bit of humidity and can get its fair share of rain. When trying to find a camera crew in Dallas, especially during the summer, be prepared for a warm moist atmosphere and plan accordingly.

Despite its culinary creativity, Dallas still holds true to its southern roots, which means mouthwatering barbecue and lots of it. Short ribs, dry rub, pulled pork, smoked brisket, there are great barbecue joints to be found at every corner. Whatever your taste is, you’re sure to find the perfect food to feed your camera crew in Dallas.

It goes without saying that any trip to Dallas is not complete without a trip to Five Sixty. Opened in 2009 as part of part of the restoration of the Reunion Tower, the restaurant offers a unique fine dining experience at 560 ft in the air while slowly making a full 360-degree rotation. The building stands beautifully against the Dallas skyline and would be a great place to get a wide shot of the city.

In 1841 John Neely Bryan, a lawyer and trader from Tennessee, built the first cabin (now restored) in the area on the riverbank. Other settlers moved into the region, and a townsite was laid out in 1844. From there, Dallas saw commercial growth with the introduction of railroads and has become an industry leader in transportation and petroleum. Now, this historical city is full of notable museums, artistic venues, and historical attractions where any camera crew in Dallas can get a great shot.

For a Texas-sized photo op or just a sight of the largest bronze monument on earth, head to Pioneer Plaza. Its renowned showpiece is a collection of 40 bronze larger-than-life longhorns, amassed as if they were on a cattle drive. This massive sculpture exhibit is a must see to capture the western feel of Dallas and works as a reminder that the city was not always, and still isn’t just a business town of skyscrapers. This is a great place to get a shot of Dallas’s historic district.

With all the fantastic adventures to be had in Dallas, it can be hard to forget that this city was also home to a tragedy. A visit to Dealey Plaza is an important stop in any trip to Dallas because it serves as a reminder of the death of John F. Kennedy, one of the youngest and most influential leaders in our nation’s history. After visiting the Sixth Floor Museum in the Book Depository standing on the grassy knoll you get a very clear understanding where everyone was and what happened on that fateful day. It would be hard to visit Dallas and not see this piece of history and tragedy, if not for the experience, then as a way to film interviews and get a shot of the history of the city. It is a good idea to hire a videographer who is also a Dallas native, if for no other reason than to have a great guide to take you through the ins and outs of important sites such as this.