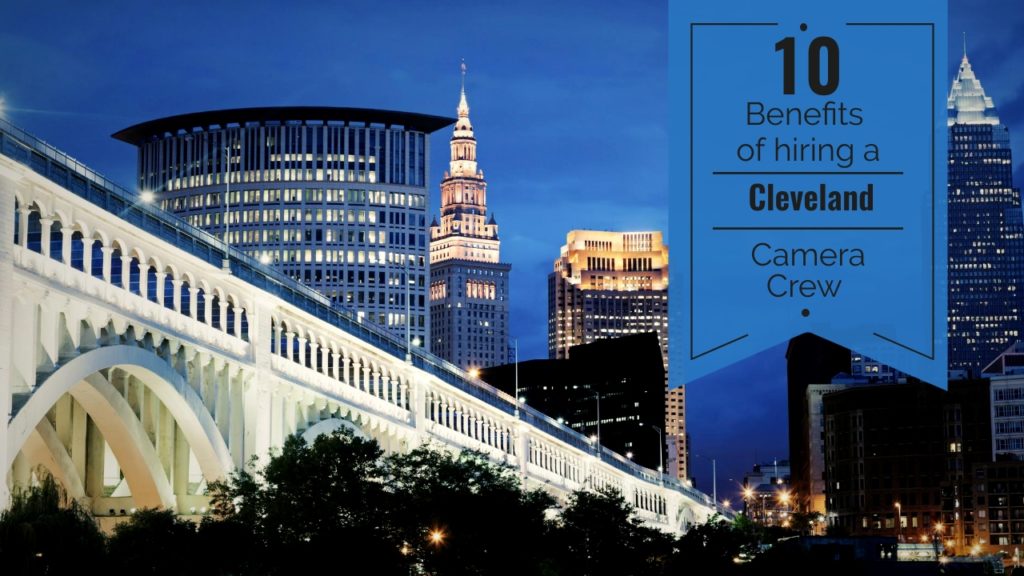 At Beverly Boy Productions, our clients come to us whenever they need to hire a Cleveland Camera Crew. With the city’s rich industrial history, world famous attractions like the Rock and Roll Hall of Fame, and typical American melting-pot style cuisine, this city is a perfect choice for an all-American experience in any production setting. Here are 10 benefits to hiring a Camera Crew in Cleveland:

TV commercial we filmed for Buckeye Cable inside during winter months.

The Rock and Roll Hall of Fame on the shore of Lake Erie, is perhaps the best-known museum recognizing and archiving the history of influential musicians, producers, engineers, and artists. With its striking pyramid-shaped structure, it is sure to be recognizable in any video you would find here filmed by a Cleveland camera crew.

The museum includes such famous exhibits like the newly updated Beatles exhibit, the Elvis exhibit, and their hip-hop exhibit; the first major museum exhibit in the world of its kind.  Definitely take a trip to this historic and legendary museum with your camera crew while in Cleveland!

The Rocky River Reservation is a woodland park split by the Rocky River in northeast Ohio, about a 35-minute drive from Cleveland. The stunning natural formations in this park include massive shale cliffs, sycamore and cottonwood trees, meadows and wetlands. There are many walking, hiking and biking trails that run throughout the reservation, and many animal species can be seen year-round.  Due to its picturesque natural beauty and popularity, this would be a perfect spot to film a video project with a camera crew in Cleveland.

The climate in Cleveland is generally temperate, with mildly hot summers averaging around 78°, and winters typically below freezing. Rainfall is average, with the rainiest season being from March-May, though it is fairly consistent throughout the year.  The best time to hire a Cleveland camera crew would be from May through September, when the temperatures are warm.  Another excellent time for filming scenes with a heavy nature focus would be in the fall, when spectacular colors can be seen on the changing tree leaves.

This garden located in the University Circle neighborhood of Cleveland features reasonably priced admission to a beautiful indoor park full of flora and fauna. There is also a butterfly room, which would provide amazing and unique footage when filming with your camera crew in Cleveland!

This 180+ acre zoo is a wonderful spot for a film production in Cleveland. In March of 2018 they welcomed their newest addition – an adorable baby rhino named Lulu!  She became an instant internet sensation and would definitely add pizzazz to any film production. Visit Cleveland Metroparks Zoo with your camera crew to spice up a production with scenes of animals and natural beauty.

Cleveland is known for its typical American cuisine, which has influences from all over the world.  Italian, Japanese, Thai, Greek, Mexican, and of course classic American fares all shine in this melting pot city.  There is something to satisfy every craving, so try out these three local favorites with your Cleveland camera crew during breaks from filming:

The USS Cod is a Gato-class submarine that was named after the world’s most important food fish on the Northern Atlantic and Pacific oceans. It operated from Australian ports during World War II, and her engines were built in its current home of Cleveland, Ohio. This would be an excellent spot if you were looking to include American Naval grandeur in your film project.

Cleveland was the first settlement founded in the Connecticut Western Reserve, and was named after General Moses Cleaveland. It experienced slow growth until the late 19th century, when it became an important industrial hub. John D. Rockefeller began the Standard Oil Company here in the 1860s, and steel production further advanced the city’s economic importance. Reminders of the two industries that jump-started the city’s stature in American industry can be seen throughout the city and are excellent reasons to bring a film crew to this historic town!

The Greater Cleveland Film Comission issues permits to those looking to film projects in the city.  Processing time varies based on season, street, and project, so it is recommended that you submit applications well in advance of your shooting date to ensure you are approved in time.

For Christmas and Film fans alike, this historic and famous home is a winter must-see.  Recently restored to its movie splendor, it’s open year round for tours and even for overnight stays.  Across the street is the official A Christmas Story House Museum, which features props and memorabilia from the 1983 classic. If you bring a film crew to Cleveland in the winter months, this would be an excellent spot to stop for a feature.