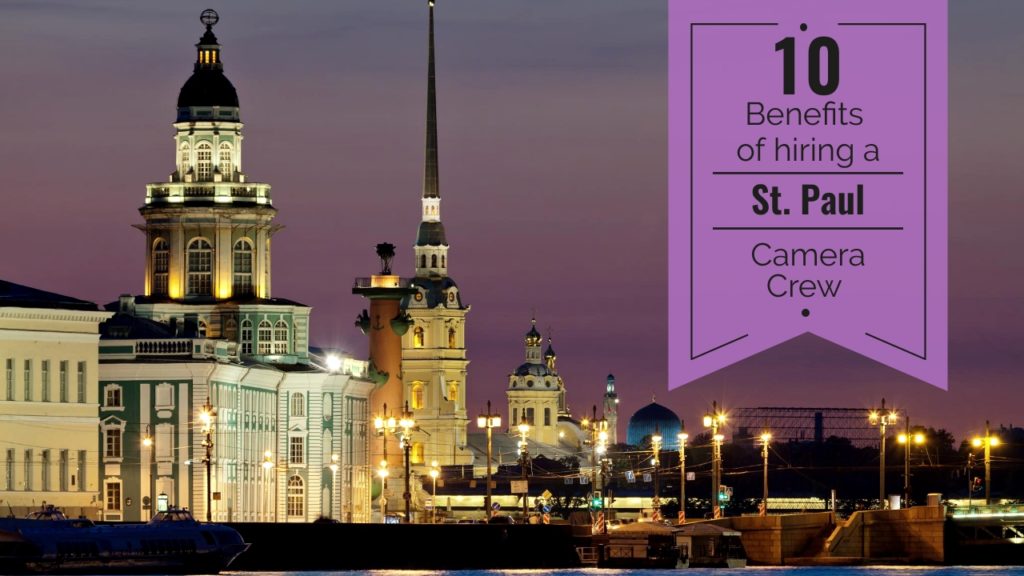 10 Benefits of Hiring a Camera Crew in St. Paul, Minnesota

Our clients at Beverly Boy Productions continue to be satisfied when they need to hire a camera crew in St. Paul, MN.  Known for being one of the “Twin Cities” along with Minneapolis, MN, St. Paul has hundreds of interesting attractions.  The city has seen explosive economic growth in the last few years, with hundreds of new restaurants, bars and shops.  Here are ten ways to maximize your next video shoot with Beverly Boy Productions in St. Paul.

Located in the heart of the Twin Cities, this park offers extensive hiking, biking, snowshoeing, and cross-country skiing trails.  Here you can canoe, fish, or swim on Snelling Lake, or hike on Pike Island, which is where the Mississippi River meets the Minnesota River. Serene landscapes, extensive history, interesting geology and abundant wildlife are all great reasons to make this park a stop when you hire a camera crew in St. Paul!

This 1905 masterpiece was recently restored to its original grandeur!  Stunning architecture, gilded sculptures, a domed cathedral-like ceiling, and Corinthian-style columns decorate this historic landmark in St. Paul.  To feature grandiose architecture or film a feature on local government, this spot is a must-see with any camera crew!

This Roman Catholic cathedral in St. Paul would be a perfect place to feature the religious history of St. Paul in a film with a camera crew.  It is half of the Archdiocese of Saint Paul and Minneapolis; it’s Co-Cathedral is the Basilica of St. Mary in Minneapolis.  It features Neoclassical architecture, and is one of the most distinctive cathedrals in the United States, and features a copper-clad dome.  It is the third largest completed church in the United States!

If your commercial production requires beautiful suburban homes as a backdrop, look no further than Summit Avenue!  It is a street in St. Paul known for having the longest avenue of Victorian homes in the country, as well as a number of historic churches, synagogues and schools.  This street dates back to the 1850s, when Victorian mansions were beginning to appear on the top of the hill in the city’s earliest days.

The climate in St. Paul is typical for a northern Midwest city – cold in the winters, hot in the summers, with temperate spring and fall weather.  It can be very humid, so be sure to prepare all the necessary clothing changes and hair/makeup products when filming with a camera crew in St. Paul.  The best time to do an outdoor video production here would be during the early fall, when temperatures are still in the mid 50’s-60’s, and the leaves on the trees are turning a beautiful array of orange, yellow, auburn and red – one of the Midwest’s biggest seasonal attractions!  If the temperature was a bit warmer, you would be able to swim or boat in the many lakes around the city, and in the winter, outdoor ice arenas can also be fun.  There are benefits to going to St. Paul at any time of the year!

Rice Park is a public park in downtown St. Paul that features a fountain, a bandstand, sculptures of the Peanuts cartoons characters, and an outdoor ice rink in the winter months.  Similar to other parks embedded within cities, this would provide a wonderful filing location, for a music festival or just capturing scenic b-roll, any time of year – though the ice arena would make for an especially nice winter scene!

Remember that when you are filming with a camera crew in St. Paul to stop for meals at some local favorites in the city!  Red Cow St. Paul is a high-rated burger joint serving happy hour and late-night comfort food at reasonable prices.  Another option is an all-organic, Creole-inspired southern comfort food joint, Brasa Premium Rotisserie.  And be sure to check out W.A. Frost and Company, a historic venue and longtime destination for upscale New American fare and wine.

The city of St. Paul issues permits to production crews wishing to film within the city.  In order to obtain a permit to film here, you must complete the ROWAY online permit application form.  Be sure to provide as much information as possible on the form to assist the regulatory services of St. Paul in approving your permit.

Less than 20 minutes from the city of St. Paul is the world-famous Mall of America.  Boasting more than 520 stores, it is big enough to house 7 Yankee Stadiums, 32 Boeing 747’s, or 258 Statues of Liberty.  If you were to spend only 10 minutes inside each store in the mall, it would take you over 86 hours to complete the trip!  There is also a 1.2 million-gallon aquarium in the mall, which has tunnels running through it in which you can see the aquarium fish in all directions.  If you hire a camera crew in St. Paul, it would definitely be worth it to take a trip to the Mall of America to purchase costumes and props that will look just right in your production!

If you are filming with a camera crew in St. Paul in the late summer, you definitely want to stop by the Minnesota State Fair!  For 12 days before and including Labor Day, the largest state fair in the United States offers music, food, drinks, entertainment, shopping, and more to nearly 2 million visitors every year.  Its slogan is “The Great Minnesota Get-Together”, and the giant festival could not have a more appropriate name!  This is a must-see in St. Paul!