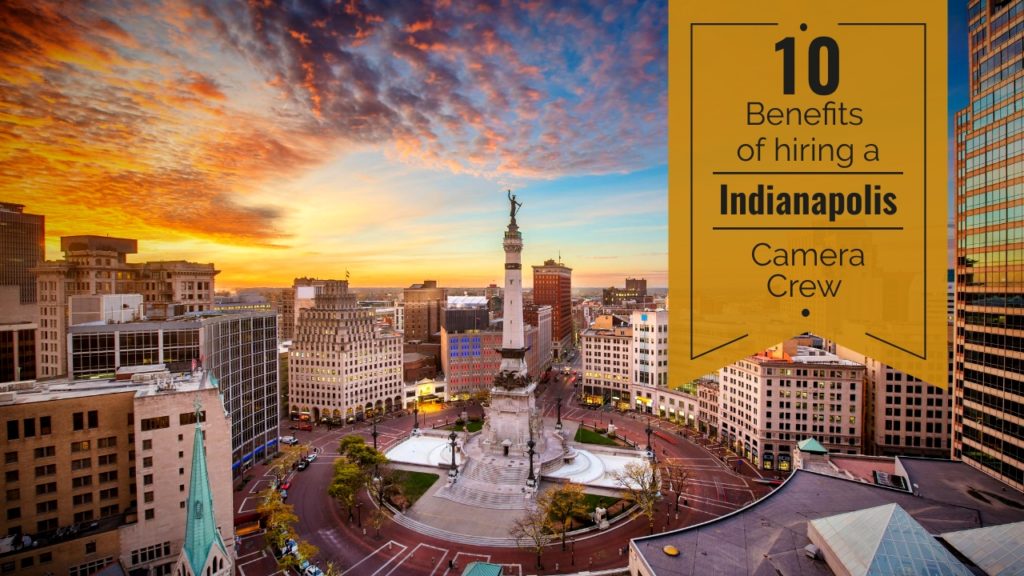 Top 10 benefits to Hiring a Camera Crew in Indianapolis

Over the past 15 years Beverly Boy has had the pleasure of gathering superb video content for our clients in Indianapolis. We present to you 10 benefits to hiring a camera crew in Indianapolis.

We filmed this behind the scenes look at the making of RIO the video game in Indianapolis with Jesse Eisenberg.

Indianapolis was a huge hub of German Immigration from 1820 – 1890 that greatly affected the culture of the city.  A great way to capture this historical immigration movement and culture of German ancestry is to film in Germantown.  Located there is a historic landmark that was once known as the German Renaissance Building, but during WW1 the name was changed to the Athenaeum.  It’s a place that celebrates the German-American culture.  This site can provide your Indianapolis film crew with amazing architecture from stained glass windows to beautifully laid red brick walls.

When hiring a film crew, it is important to find out if you need a permit or not to film.  The state of Indiana does not require permits, but if filming on some state and city-owned properties, one is required.  For help on this matter, contact Film Indiana for permit help, road closures, and dealing with private property shoots.  Click here for more information.

Indianapolis doesn’t offer much in public transportation, but is a great place to walk or bike around with climate controlled sidewalks and plenty of bike shares.  the city does offer bus transportation, Lyft, Uber and you can rent Blue Indy electric cars with charging stations located at the airport, host hotel, and the convention center in town.

A must have if filming in Indianapolis or just to visit is the Indianapolis Motor Speedway.  Home of the Indianapolis 500, one of the world’s most popular races.  Not only is this spot for racing, but it is also the testing zone for many auto innovations, thus giving us the rear view mirror and other innovations to lead to the cars we know today.  Film the museum at this location too for a look of how cars have changed throughout the decades.  Great for auto enthusiast viewers and to gain some historical information on Indianapolis.

Located in the Midwest, Indianapolis being the center can have some fluctuating weather.  The weather can change daily from warm to cold quickly.  The city is usually cloudy and gets about 26 inches of snow per year.  There are about 186 days of sunshine through the year.  If filming in the months of November to March, expect some snowfall.

Take a break from filming while tasting some Hoosier cuisine.  A mix of German and American cuisine can be found abundant in the area.  From sausage, craft beer, and some of the best sandwiches in the United States, there is something for everybody.  A must is the Tenderloin Sandwich, a hammered thin breaded and fried pork sandwich.  Also, make sure to stop by Goose the Market for other excellent sandwiches and a great wine selection.  And for dinner, go to St. Elmo Steakhouse for some amazing steak dishes and their signature shrimp cocktail.  If you and your crew are feeling dessert instead, a sugar cream pie should hit the spot.

Indianapolis is fairly nice in the summer and spring with highs in the 80’s, but the winter can be rather cold with lows in the 20’s.  Prepare for rain in May for your crew if filming during the rainy season during summer as it is the wettest month.

For romantic scenes or just to capture a scenic view of the city, the “OLD WORLD GONDOLAS” can bring a sense of being in Venice.  Board at the Fresco Cafe to gain these beautiful shots of the city.  Hire a videographer to capture events such as business retreats and other corporate celebrations aboard the peaceful gondola ride.

In the heart of Downtown Indianapolis, lies one of the true symbols to Indianapolis known as the Monument Circle.  Christ Church Cathedral, Hilbert Circle Theater, and the Circle of Lights are all sights definately worth seeing that reside in this tremendous area dating back to 1821. Perfect for obtaining some nice B-roll or even a quick interview just in need for an astonishing background.

In need of a place to film and interview, collect some nice candid shots or to gain some footage of the art culture of Indianapolis, head over to Fountain Square.  There is a gorgeous water fountain located at its center with amazing restaurants, antique shops and working artists.  Live music is always being performed in the square adding to the funky atmosphere.  There are also plenty of events taking place in this great location.