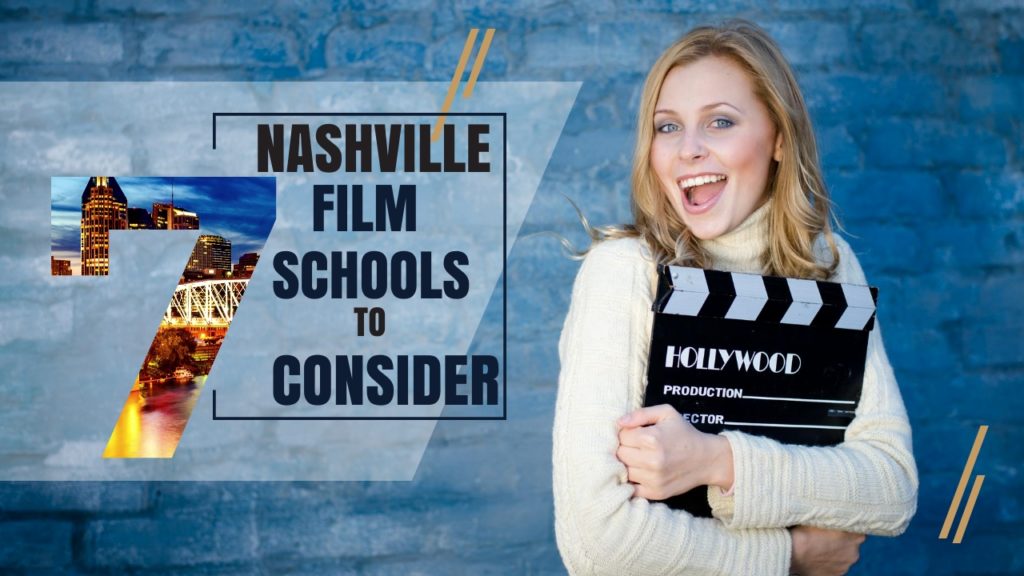 Nashville, Tennessee has a great film industry and as such, there are many budding filmmakers that want to get their chance at doing what they love. If you want to find the Top 7 Nashville Film Schools, you’ll appreciate our list of options around town. These schools are top communities where top Nashville filmmakers receive personalized training that can make a difference in how they get started on their career in the Nashville industry. These schools have programs that are very in-depth and intense and also more traditional, laid-back options from local universities that still offer a top film program.

Many of these options help with the preparation for the graduates so that they can actually accomplish successful careers in Nashville film production, visual arts, or even photography. When you study the core principles of filming, editing, and the overall production process, your career path can take you to  some of the best film companies, agencies, or even in self-employment. 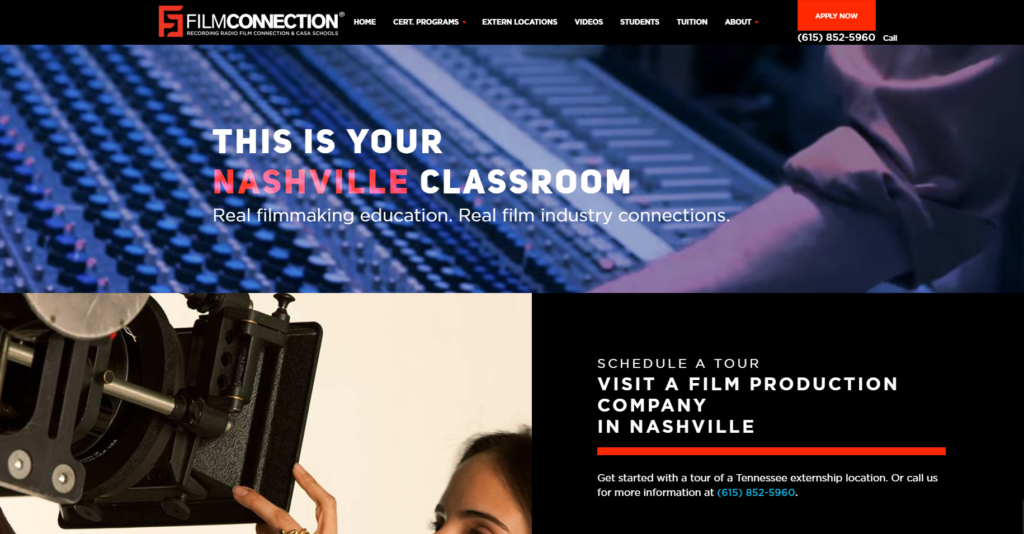 The Film Connection is an affordable option that is big on a mentoring, hands-on experience that allows students to have a more personalized approach to learning. The program provides courses on film production and editing as well as cinematography. The school is also big on workshops that include screenwriting and film editing, so whether you want to go to school full-time or simply take workshops to improve your skills, Film Connection has various options.

The Nashville Film Institute is an inclusive film school offering hands-on, vocational type training that helps students to not only learn theory but also get their feet wet in the actual work of being a filmmaker. The NFI offers a nine-month program where you’ll learn the following:

And, so much more. 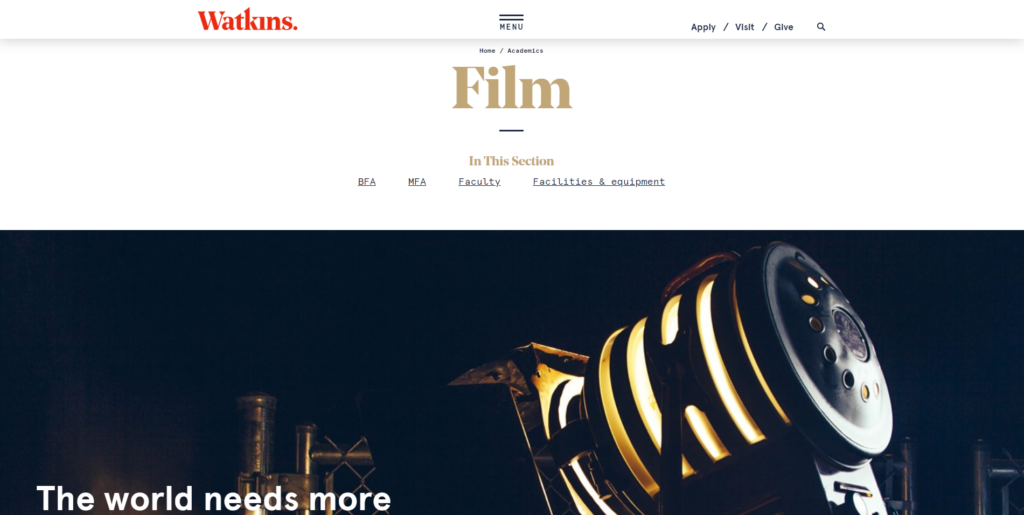 Watkins is an art institution that has been around for a long time, dating back to 1885. As a staple in the film and art industry, the school offers plenty of programs spanning from interior design to film. Some of the ideal programs for aspiring filmmakers are a Bachelor of Fine Arts or a Master of Fine Arts. You can expect to learn everything from production stages to screening theatre, and so much more, making this a great option in our list of top 7 Nashville film schools. 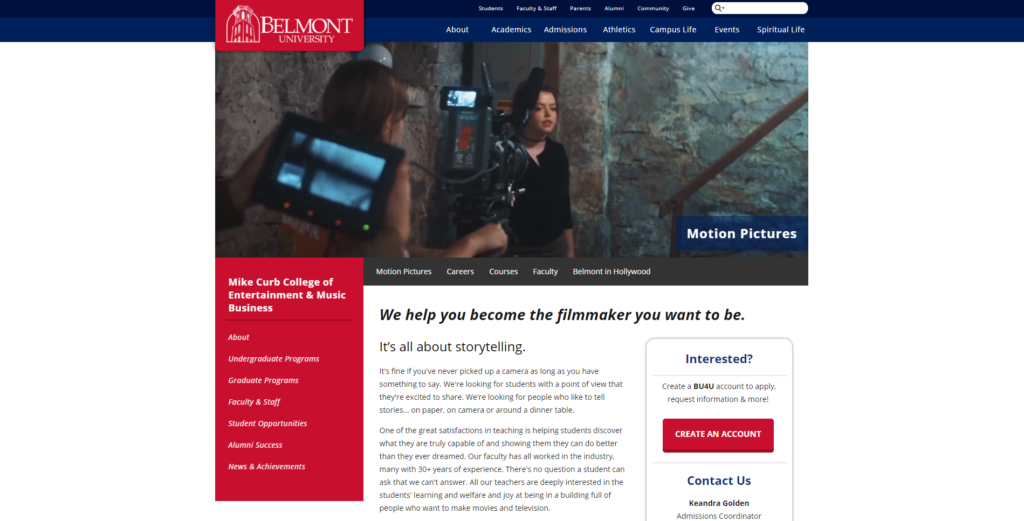 Belmont offers a plethora of programs and while it’s not just a film school, they have a pretty great program that promises hands-on teaching for students. Aspiring filmmakers that want to start playing with the good stuff don’t have to wait long, as the school gets students started on the nitty-gritty (with cameras in hand) in the first semester. Consider getting a Motion Pictures major at Belmont University.

The Murray State University offers plenty of programs spanning different career paths. With it’s personalized approach, its Film Studies program is an in-depth option for aspiring filmmakers who want to learn everything from the history to the theory behind film studies. 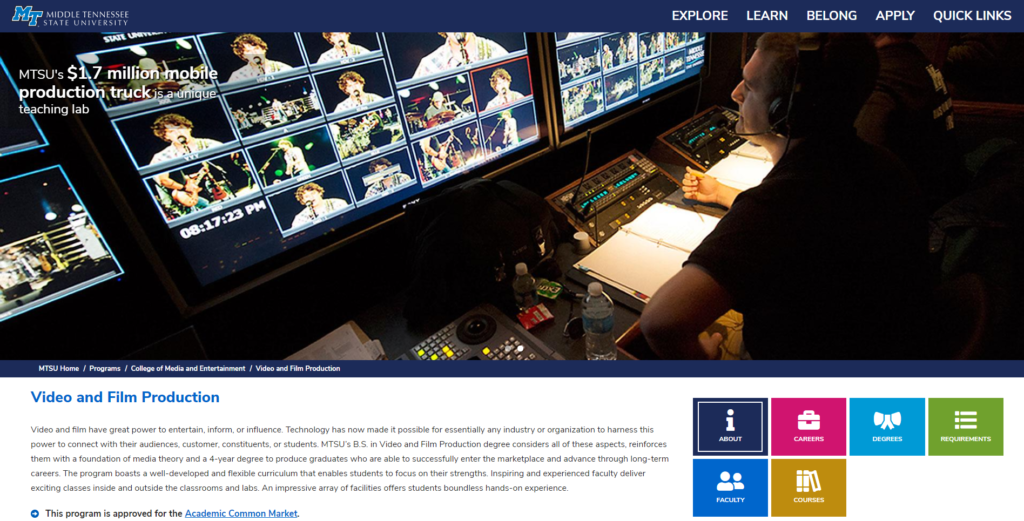 Offering video and film production among other programs, the Middle Tennessee State University offers a 4-year degree program in Video and Film Production that not only teaches students everything from media theory to actual experience, but provides you with the degree to prove your skills. As an important educational institution in the region, this program is considered attractive by many, making it a top contender in our list of top 7 Nashville film schools.