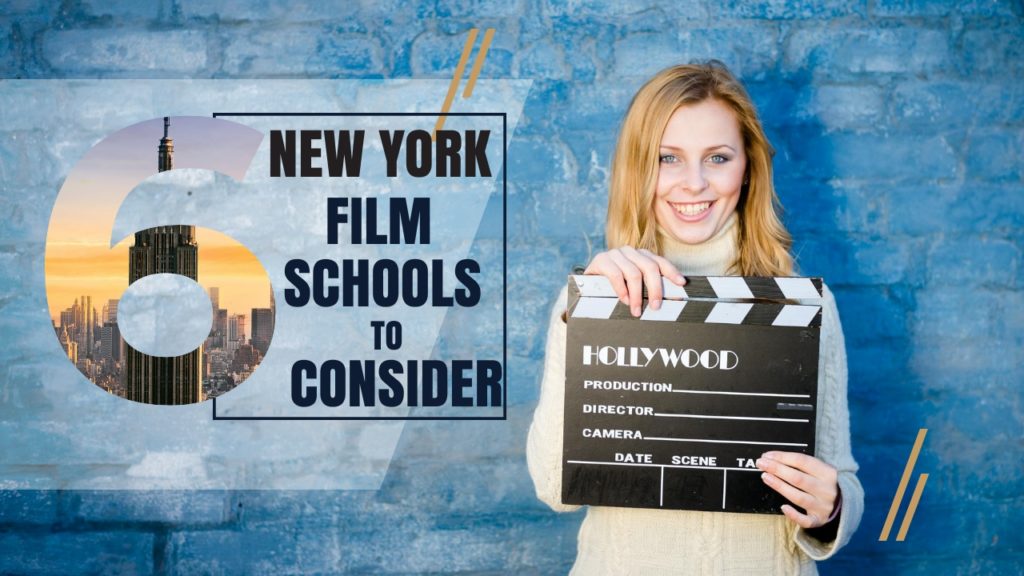 As a New York video production company we know how important your selection process must be. While there are so many film school options to choose from in New York, NY, there’s a handful of great schools where you could learn the skills you need to step into the field. To help you out in narrowing down your options, we’ve created a list of noteworthy schools where you can pave your path to success. Good luck, future New York filmmaker! Break a leg. 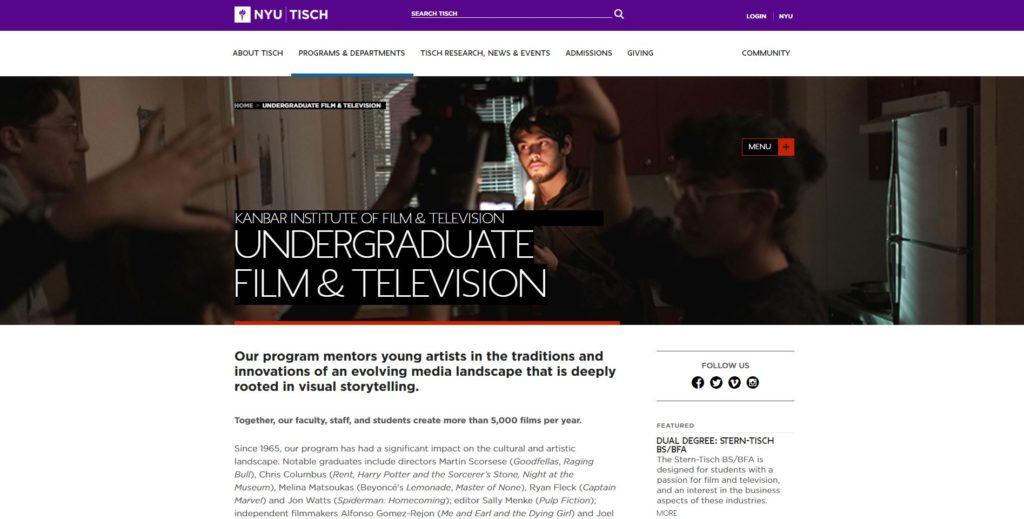 Between staff, students, and faculty, NYU generates more than 5,000 films per year. Impressive, right? Martin Scorsese (Goodfellas) and Chris Columbus (Night at the Museum), editor Sally Menke (Pulp Fiction), independent filmmakers Alfonso Gomez-Rejon (Me and Earl and the Dying Girl) and Joel Coen (No Country for Old Men) are just a handful of the impactful filmmakers that graduated from this top-notch school.

Cinema Studies and Undergraduate Film & Television programs are both offered at NYU. Additionally, NYU offers summer courses, workshops, and even high school courses for aspiring filmmakers looking to get a step ahead. 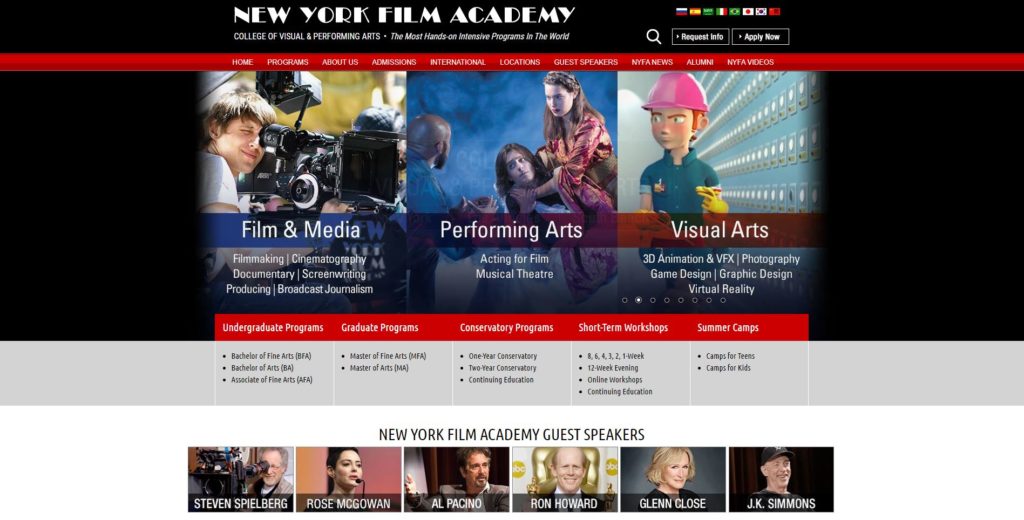 The New York Film Academy is a hands-on film & acting school. Steven Spielberg, Martin Scorsese, and other astounding figures in the industry have sent their family members to this school to study the craft of filmmaking.

The New York Film Academy offers everything from degree programs, to conservatory-style programs, to workshops and camps. Depending on your level of experience and what you’re interested in doing, this school has plenty of tracks to choose from. Filmmaking, screenwriting, producing, 3D animation, and cinematography are just a few of the topics address in the New York Film Academy’s world-renowned programs.

At the Pratt Institute School of Art, the BFA in Film program is built to foster learning in the next generation of filmmakers. Whether you’re interested in building movies for the big screen or finding success in YouTube communities, Pratt addresses it all.

Starting freshman year, students have immediate access to the latest digital cinema cameras, microphones, editing resources, and other types of production materials. Pre-professional experiences are abundant at this school, with microcinemas and top-notch galleries that expose your vision to the community. This allows you to network and build connections before stepping out into the field on your own!

4. The City College of New York

This remarkable college is home to one of the oldest film schools in the country, offering a small class size for a more personal, hands-on experience. The City College of New York is also proud to be the only public school in NYC to offer a BFA in film.

When you enroll in this program, you and your 24 fellow students will be immersed in an exciting, intense two year curriculum where you’ll be producing mostly narrative and documentary film. This school encourages students individuality, and provides them with the skills and tools needed to play a key role in the always developing world of film. 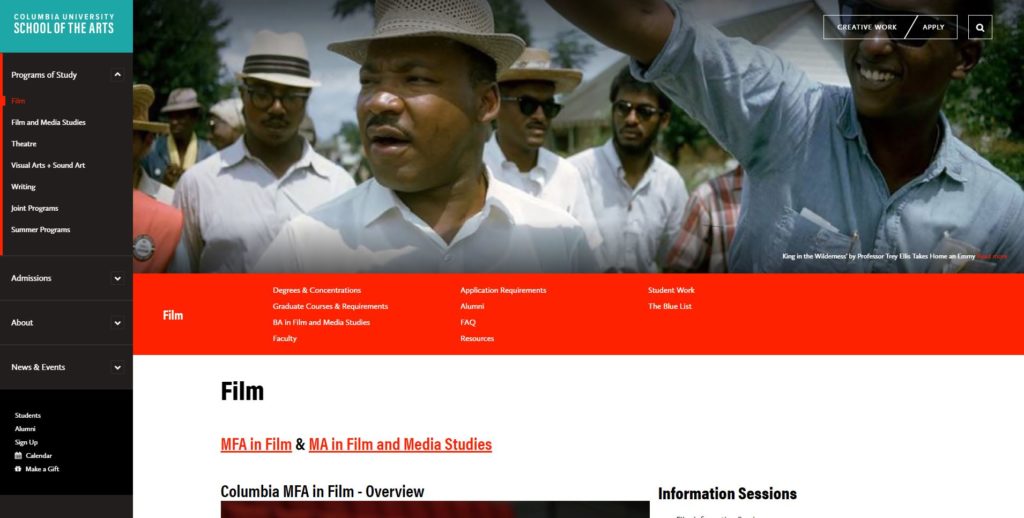 This world-renown university is host to one of the most exclusive film schools in the country. With only 6% of applicants gaining admission, you know if you’re accepted here you will be among the cream of the crop and will be receiving an incredible education.

Columbia’s film school offers an MFA program with a focus in either one of two areas: Screenwriting/Directing or Creative Producing. In the Screenwriting/Directing program, students will take a number of creative workshops and participate in research arts work, creating a few short films as well as writing both feature length and short films scripts. In the Creative Producing program, students will have a chance to work with producers currently participating in the field to gain the necessary creative and business skills needed to produce a film. 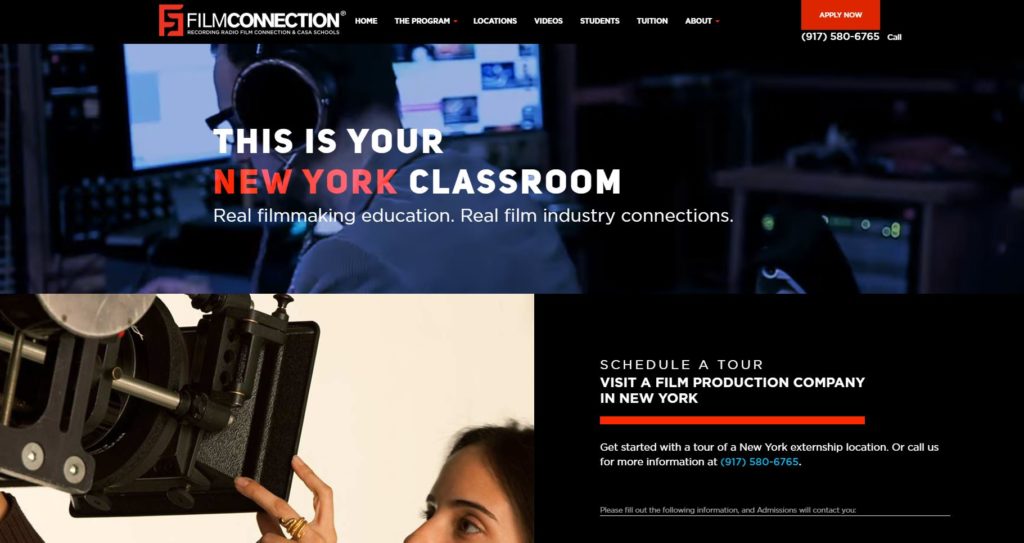 In the Film Production & Editing program, you’ll be studying all aspects of producing, directing, and screenwriting from industry professionals while developing your amazing idea with a real filmmaker. Once you’ve met the necessary requirements, you’ll get the opportunity to pitch your script to an executive and just maybe see your story brought to life! In the Cinematography program, you will learn all the necessary skills to become a DP (director of Photography) in a hands-on, incredible environment.

These schools are a little outside the city, but still incredible institutions that can help boost your film career. 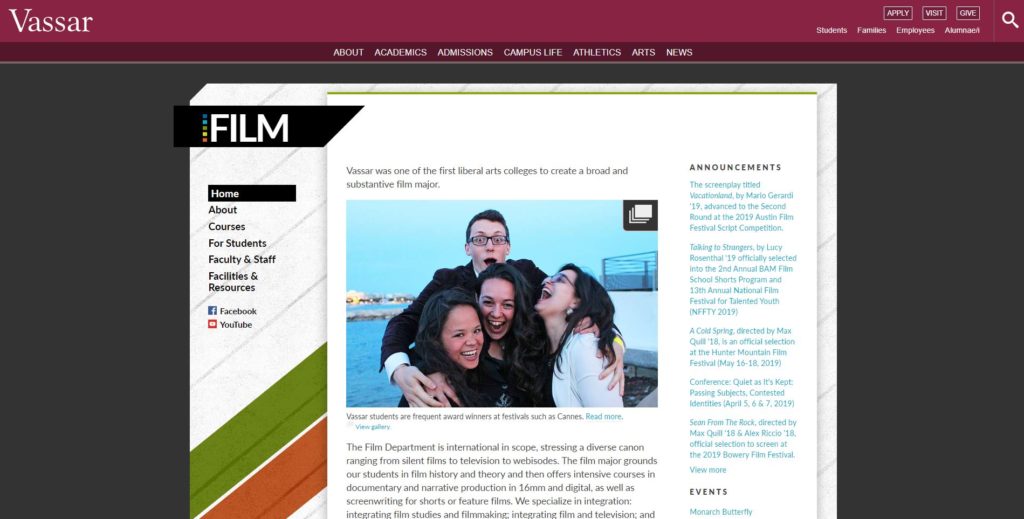 This college is one of the first liberal arts colleges to have an intensive film major at its school. Vassar College’s Film Department is international and diverse, covering everything from film theory to history, and every type of film in-between. This school’s BA degree covers two different areas of film: Film History and Theory and Screenwriting and Production. This way, students are exposed to the foundations of film before working in the field.

Integration is key for Vassar College. For example, integrating film studies with filmmaking, and integrating film and television, allow students to maximize their learning opportunities! Eventually, students will “integrate” themselves into the filmmaking community with all of the skills learned at this school. 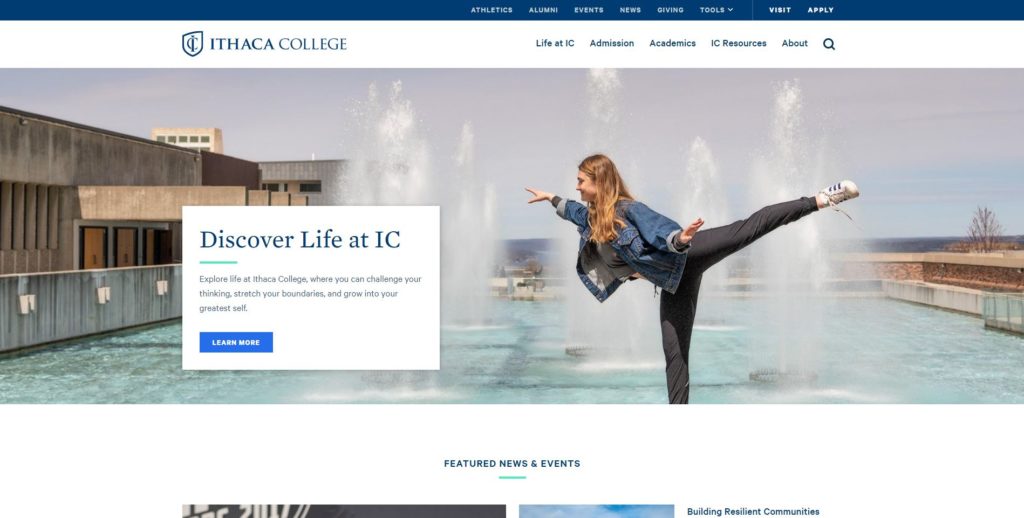 Ithaca College’s B.F.A. in Film, Photography, and Visual Arts is truly the whole package. This degree program is best for students looking to experience a wide range of opportunities in the filmmaking process. From exploring digital media, to photography, to television studies, Ithaca’s diverse undergraduate track can prepare you for any professional environment.

Recent graduates from Ithaca College are already working in art and production with companies such as R/GA advertising agency and Bull Moose Pictures LLC in New York City. Perhaps this well-rounded program can benefit you too!