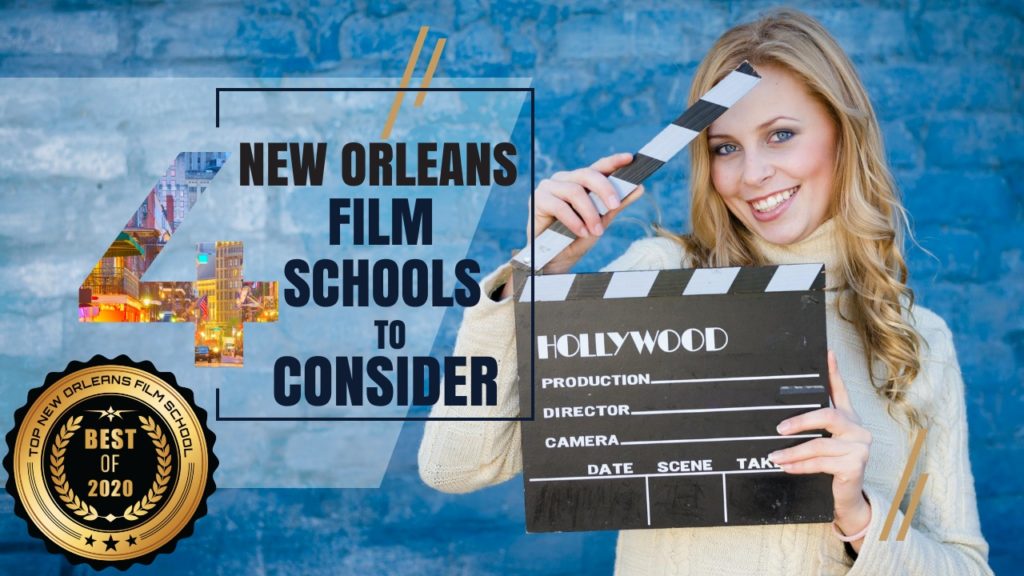 New Orleans, Louisiana has a booming film industry with many aspiring filmmakers just waiting for their chance to start filming the next hit show or movie here. No matter if you’re looking for large or small New Orleans film schools, you can find one on this list that is a great fit for you and your needs. The schools listed offer more than an education- they offer communities where up-and-coming New Orleans filmmakers can receive top-of-the-line training to get their career in the New Orleans industry rolling. These schools offer traditional classes and university settings, as well as more modern and hands-on classes, and they all offer a outstanding film program to learn from.

Many of the schools on this list prepare their graduates specifically for careers in New Orleans film production, the visual arts, and photography by studying the principles of filming, as well as the practical applications of the skills. This education will help with finding employment in major film companies, news studios, and advertising agencies or with self-employment in film

1. The University of New Orleans 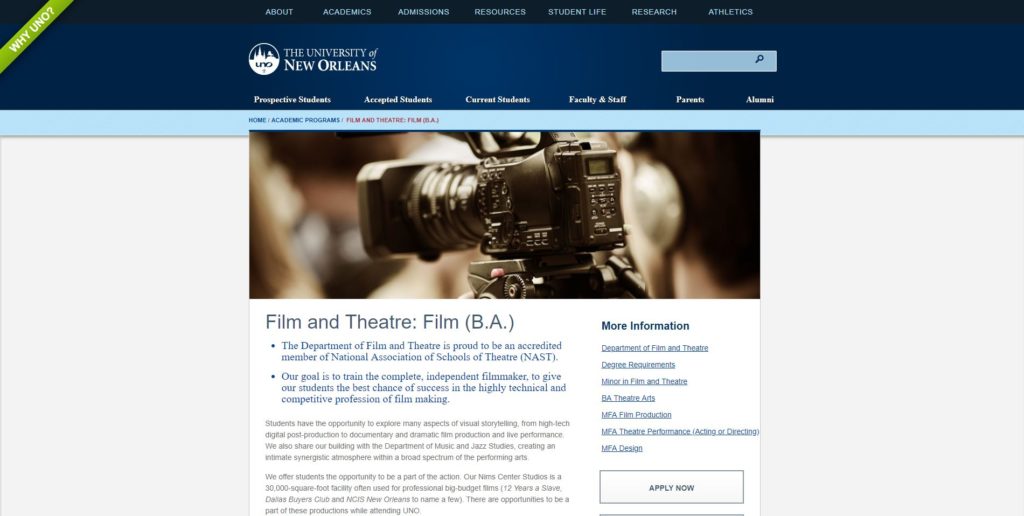 The University of New Orleans isn’t just one of the most well-known New Orleans film schools, it’s one of the most popular schools in all of New Orleans. The Department of Film and Theatre is an accredited member of the National Association of Schools of Theatre (NAST) and the faculty there aim to train independent filmmakers so that they can succeed in the profession of filmmaking. At UNO, students can take classes on HD post-production, documentary and dramatic film production, live performance, and more. Students will train at the Nims Center Studios, a 30,000-square-foot facility that is used for professional big-budget films, and while attending UNO, students will be offered opportunities to be a part of those productions.

2. University of Louisiana at Lafayette 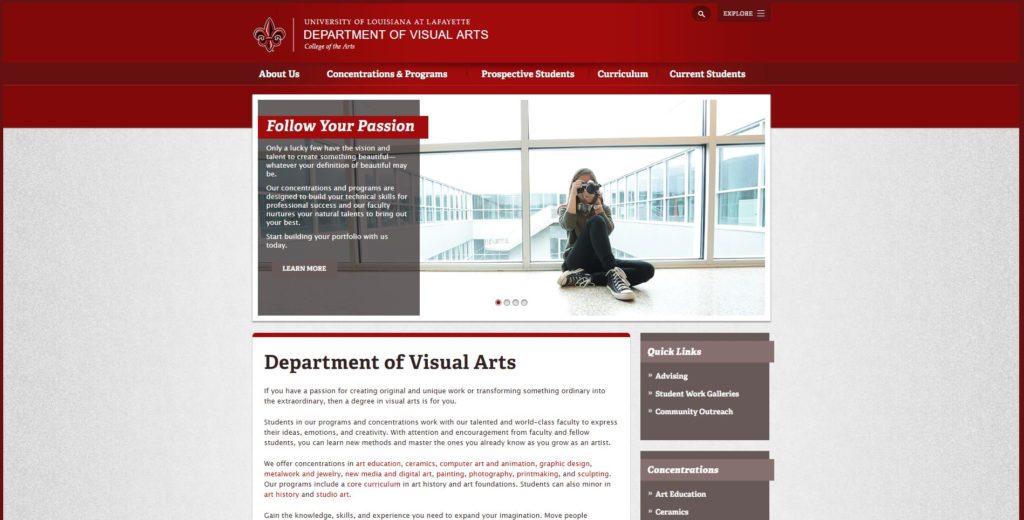 At the University of Louisiana at Lafayette (ULL), students can take the New Media and Digital Art concentration, which embraces and studies the social impact of technology based art. In this progressive program, you will learn fluency in video art, digital cinematography, computer generated imagery, digital sound design, and multi-media installation art. Graduates have presented their work at the Cannes Film Festival, and have worked on major films.

This program is taught in the Digital Media Resource Center and the New Media film studio, which features hexa core workstations, editing software such as Adobe Creative Cloud and  PixelFarm PFTrack (t o name a few), and has many camera systems, a sound recording booth, and a 650 square foot green screen studio. All of this gives students hands-on experience with the latest film technology.

University of Louisiana at Lafayette

Dillard University was almost wiped out by Hurricane Katrina, but it has made a huge comeback and is now one of the top schools in New Orleans for filmmakers trying to break into the entertainment business. Dillard allows students to work on real-life feature films, learn every aspect of filmmaking, and learn in small class sizes that gives them the opportunity to have a more intimate experience. Dillard has partnered with established filmmakers who are filming in New Orleans to allow their students to apply what they learn in the classroom to real films. 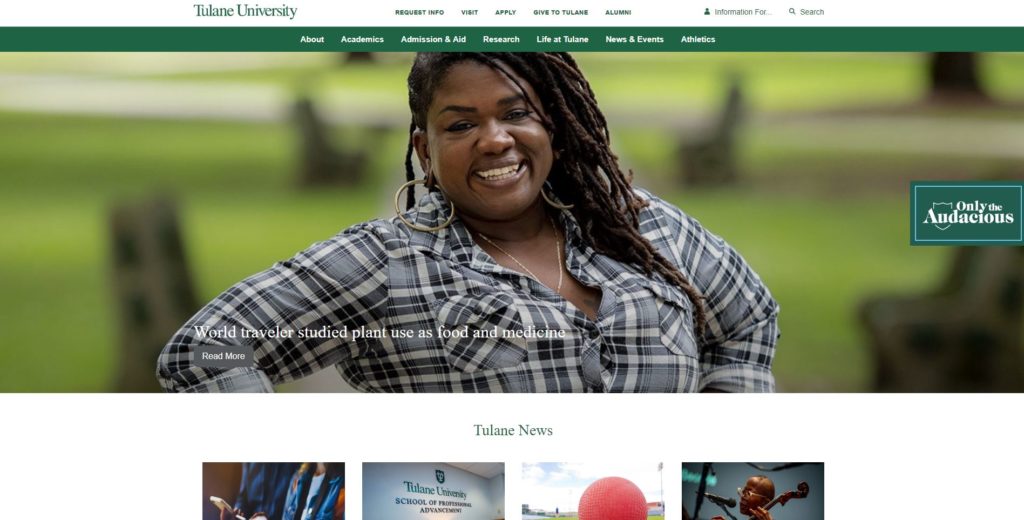 New Orleans has become a major center for Digital Media Production, so that is why Tulane (one of the highest quality New Orleans film schools) offers a Coordinate Major in Digital Media Production to get students prepared to become a part of the fast growing film industry. In this program, students will receive an education in the craft and technology of film, television, video, animation and sound production with hands-on experience. The coordinate major is a “minor,” so students must declare a different major before taking these courses. The DMPR program is 30 credits long and those credits can be earned from elective courses in Music, Theatre and Dance, Communication, Art, or English, as well as five required courses in Digital Media.