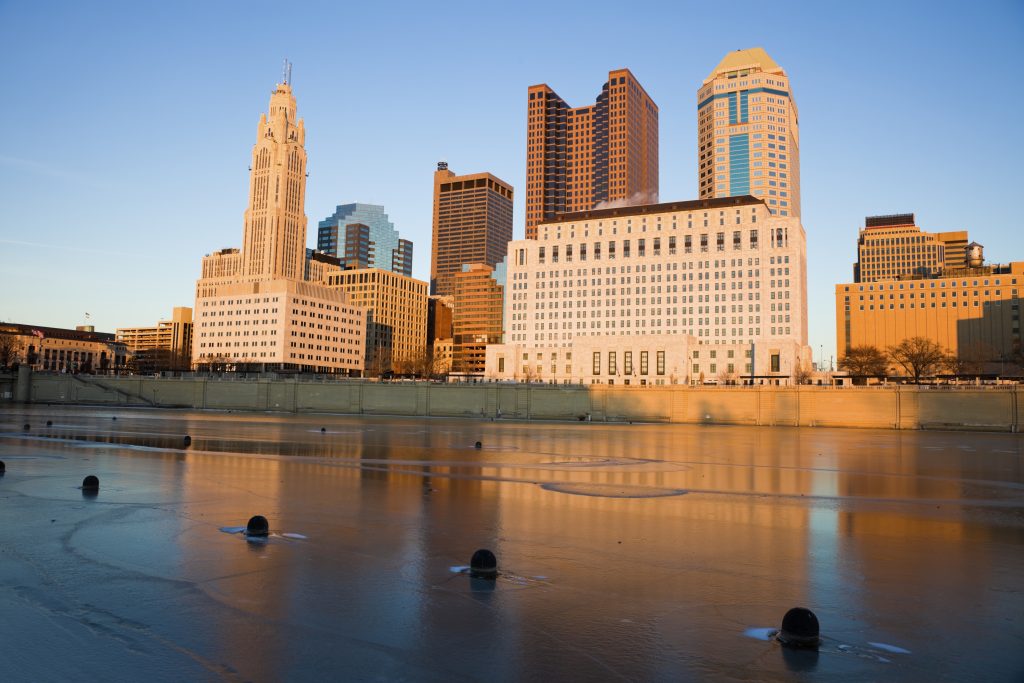 Beverly Boy has had the pleasure of capturing great moments for our clients in this great city. Here are 10 things to look forward to if you need to hire a camera crew in Columbus. In the center of Ohio lies its capital Columbus.  From great football teams to innovation history, this city offers it all.  This great city draws in visitors from all over for its role in the civil war and industrialization as we know it today, while still giving nature free reign to flourish and be celebrated.  We found 10 benefits and facts to know when filming your next shoot in Columbus, Ohio.

Located in the Midwest, Indianapolis being the center can have some fluctuating weather.  The weather can change daily from warm to cold quickly.  The city is usually cloudy and gets about 26 inches of snow per year.  There are about 186 days of sunshine through the year.  If filming in the months of November to March, expect some snowfall. Before you Hire a Camera Crew in Columbus, please keep this in mind.

TV commercial we filmed for Buckeye Cable inside during winter months.

Columbus, Ohio was made the new capital of Ohio in 1816 after officials decided the capital should be more central.  During the Civil War, the city served as the location for Fort Chase, a military prison for Confederate soldiers.  The prison is gone, but the inmates have been memorialized by the still standing Camp Chase Cemetery.  The quiet cemetery could serve for a nice shoot if following the history of this great capital of Ohio.  The city after the war thrived industrially.  It was known as the home to the nation’s best horse drawn buggy manufacturer.  During this industrialization, German immigrants started to flood the city in search of jobs.  This lead to the German Village area of the city.  South of downtown, this historically restored area is great for b-roll captures and gathering quiet shots of the area.  They still hold Oktoberfest events and would be a great time to film the festival close to home.

After you book your Columbus camera crew, you must consider the local cuisine. When taking a break from filming, why not visit popular foodie attractions.  They boast the Midwest American cuisine, but also has German influences with many other ethnic choices.  If filming in the summer, try out amazing gyros during the Greek Festival.  A must have is the Spicy Bahama Mama at Schmidt’s Sausage Haus.  It is a spicy pork sausage that pairs well with their in-house mustard.  If the crew is wanting to reward their sweet tooth, grab some Belgian style waffles, ice cream from Jeni’s Splendid Ice Creams or Nutella Pancake Balls at Katalina’s Cafe Corner.  If out on the town at night, give the Columbus Ale Trail a try to taste the local brews.

The ideal weather for visiting and filming in the city is at the end of April to mid-June.  Expect rain and higher temperatures in July around the 80’s.  Though July is the wettest month, the time from June to September is the sunniest.  If filming in February, prepare for mass amounts of snowfall. Keep this in mind before you Hire a Camera Crew in Columbus.

Promotional video we filmed that demonstrate protective siding during those winter Columbus months.

Columbus offers many ways to get around the city.  Mainly thru car rentals and taxi services like Uber, Lyft, and the city taxi service.  These services are great for transporting equipment to each location quickly and efficiently for your next film shooting.  Biking is also an option as well as the public buses, but for ease of use, a rental or taxi is best.

The Center of Science and Industry gives a glance into the industrial revolution’s effect on Columbus, Ohio.  It is the most respected center in the nation, offering a unique place for a videographer to capture an interview, expand on technological themes or to witness great activities that the center has to offer for educational purposes.  It also offers a great place for the crew to unwind with the Atomicafe restaurant and multiple shows such as the nation’s only high wire unicycle and the Electrostatic Generator show.

When hiring a crew in Columbus and filming, the Franklin Park Conservatory and Botanical Gardens is a must.  With gorgeous exhibits, gardens, and collections, it offers amazing footage for either still shots, romantic scenes, interviews or b-roll captures.  If filming for an educational or artistic theme, this location also offers great programs such as classes offered at the conservatory and the Hot Shop, featuring glass blowing demonstrations.  It is open year round and one can also book the location for special events such as weddings and business trips.

The Scioto Mile is located in the very center of Columbus and offers 175 acres of lush parks land.  Use this to your advantage for nature scenes or to gain amazing footage of the 15,000 square foot fountain.  The fountain is interactive and a great gathering spot for locals and tourists alike.  If visiting in early December, hire a crew for the Winterfest.  Winterfest offers amazing foods and ales while also giving great musical entertainment from local and national artists.  It’s a great way to film the culture that Columbus has to offer.

Home to the iconic Buckeyes, the Ohio Stadium is a must see according to fans and locals.  Hire a cameraman to film the amazing fans of the Buckeye’s during games and other special events.  The atmosphere is unlike no other with friendly fans of the sport and team.  If filming shots of Columbus, you need to include this spot to really showcase the Columbus spirit.

When hiring a film crew, it is important to find out if you need a permit or not to film.  The state of Indiana does not require permits, but if filming on some state and city-owned properties, one is required.  For help on this matter, contact Film Indiana for permit help, road closures, and dealing with private property shoots.  Click here for more information.