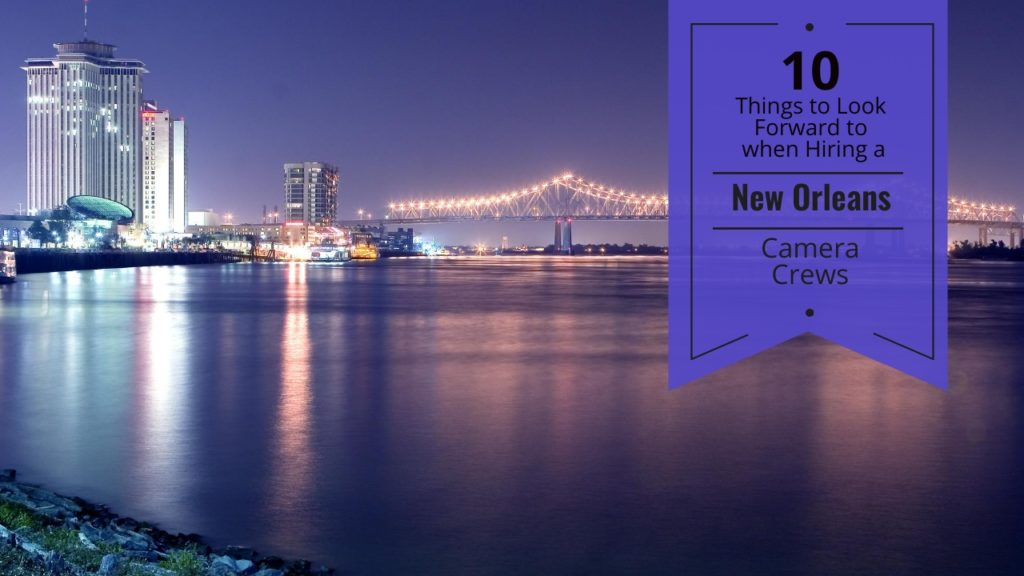 Bourbon Street is one of the oldest streets in North America.  Everyone knows that this famous spot is perfect for hosting parties, birthdays, or nights out on the town; but it also can be a perfect spot for filming.  Bourbon Street is full of New Orleans’ best clubs, bars, restaurants, and tourist shops.  Some major points of interest include the luxurious Royal Sonesta Hotel, Galatoire’s Restaurant, Jean Lafitte’s Blacksmith Shop, and The Old Absinthe House. A superb location for any camera crew in New Orleans to capture great footage.

New Orleans was founded in 1718 by the French, and was originally called Nouvelle-Orleans, named in honor of Philippe II, the Duke of Orleans.  It has been the Gulf of Mexico’s busiest northern port since the early 1700s.  It was ruled for 40 years by the Spanish after its French founding, and then was purchased by the United States in 1803 in the Louisiana Purchase.  New Orleans is a city that is steeped in its rich culture and history, and these are sure to shine through in any video production you film here!

The temperature in New Orleans rarely drops below 40 degrees Fahrenheit, and in the summer can average around 90°.  It is typically very humid, so be prepared for this type of weather when filming outdoors.  Heavy rainfall is typical in the summer months, with June-August being the peak rainy season.  If you are planning to film in New Orleans, we suggest considering October, or March-May, when the temperatures will be between 70-80° and there will be less rainfall.

The French Quarter in New Orleans is one of the city’s oldest neighborhoods, having been established in 1718. It is bounded by Canal St., Decatur St., Esplanade Ave., and Rampart St. This neighborhood boasts everything from the elegant architecture of Royal Street to the party vibe found on Bourbon Street.  Live music, restaurants and bars, voodoo shops and temples, the French Market, and the famous Café Du Monde can all be found here.  Strolling the streets of this exciting and culturally rich neighborhood is sure to provide great B-roll for your New Orleans camera crew!

The Saint Louis Cathedral is a beautiful, notable landmark in the heart of New Orleans. Overlooking the picturesque Jackson Square, it is a perfect area to schedule on your shot list for your New Orleans camera crew.  It is the oldest Catholic cathedral still in continuous use in the United States!

There are hundreds of available haunted city tours in New Orleans – either self-guided or with a guide.  From voodoo tours to vampire tours to ghosts and graveyards tours, New Orleans is known for its haunted history and spooky sites.  Taking a film crew on one of these tours will definitely add an element of fright to any video project!

Exploring the swamps surrounding New Orleans is one of the most interesting things you could do as a day trip from the city.  They are full of wildlife including alligators, bald eagles, herons, egrets, mink, and turtles.  There are 3 major swamps to choose from: the Honey Island Swamp, the Jean Lafitte National Historical Park and Preserve, and the Maurepas Swamp Wildlife Management Area, all within an hour’s drive from the French Quarter.  These would all provide excellent outdoor filming locations!

Film New Orleans generates a free-of-charge blanket film certificate for all film and video projects working in the city.  This certificate is required in order to acquire all additional permits, so be sure to fill out the Filming Application prior to hiring a film crew in New Orleans.

There are so many wonderful options when dining with a film crew in New Orleans.  Typically flavorful, seafood or Cajun-inspired food dominates the market in this port city.  You can find something for every budget, and if you enjoy spicy foods, New Orleans is the place for you! Here are three local favorites:

Mardi Gras is probably the most famous reason that tourists visit New Orleans every year.  Also called Fat Tuesday, it refers to the events of the Carnival celebrations.  It can be traced to medieval Europe, and in New Orleans, huge parades and parties commence on the day before the Catholic holy day, Ash Wednesday.  People wear masks, beads, colorful clothing, and associate themselves with different  “krewes”.  Mardi Gras would be a perfect time to hire a film crew in New Orleans if you are looking to capture the amazing spirit of the people of this cultural city!